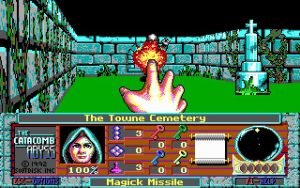 Catacomb Abyss 3D is a fantasy first-person shooter game. Similarly to the previous game in the series, it casts you as a mage who can fight enemies and destroy whole sections of walls thanks to the use of fireballs. You can find various magical artifacts, which make for more effective weapons but are one-use, healing potions, scrolls with hints, and keys. However, unlike in Catacomb 3-D, where you spent the whole game inside a dungeon, here you’ll explore various environments, both indoors and outdoors.

There are new enemies to face, such as zombies that come from under the ground or skeletons that come out of walls. The levels are built in the typical square-based layout that is specific to games such as Wolfenstein 3D. New to the game is a radar which shows you the location of foes. However, you have to find gems of various colours to use it effectively; each gem allows you to see a specific type of enemy on the radar. There isn’t a compass in the game, but various areas of the maps still have specific names.