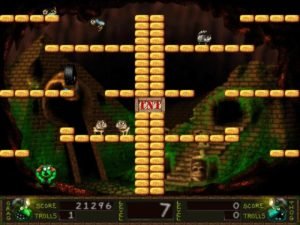 Bonkheads is a fun little Mario Bros clone that plays a lot harder than it looks. You control Crag as he travels down the underworld – twelve worlds are on offer with five levels each, plus numerous enemies, power-ups and the odd boss fights along the way. Gameplay is pretty much identical to Mario Bros – you have to knock out enemies by hitting the tiles that they walk on, kind of like you could do in the old Mario games. Enemies become unconscious after you knock them out, and you have a few seconds to throw them off the level before they get back up.

It sounds simple but the levels become increasingly challenging and the gameplay ever more frantic as you progress. It’s a fine tap dance as you try to avoid getting swarmed while dodging the occasional random hazard like falling tires. You can even the playing field by saving periodically and bringing a friend to play with you, as Bonkheads supports two players on the same computer. It’s all good simple, challenging fun.