NovaLogic’s Armored Fist series didn’t quite start out with a bang, and the announcement of a sequel – and after that yet another sequel – left plenty of room for due skepticism. Now we have the third and final Armored Fist game, forever cementing the series as the prime example of gaming mediocrity that it always was.

A Fistfull Of Bad Controls A few recurring issues have long characterized the series, including some terribly uninspired controls and camera, lackluster mission design, rubbish engine and poor realism (Novalogic swears this is the ‘definitive M1A2 Abrams simulation’ – what were they smoking?). Still, some of these low points could have been given a pass by patient gamers if it weren’t for the controls and graphics, both of which are beyond offensive. Although you may find some incremental advances, the game is still too needlessly awkward to fully enjoy despite its notably arcade pedigree.

In Armored Fist, you have a choice of controlling the M1A2 Abrams MBT (Main Battle Tank) from one of three perspectives – driver, gunner or commander. Each station is finely modeled, with individual controls that can be manipulated using the mouse. It doesn’t make much difference though – you can hop into the driver’s seat and still be able to target and shoot with the gun; but at the same time individual stations offer more of a fine-tuning option for each system when precision calls for it. For example, you can hop into the commander’s station and scan the landscape for threats using the CITV (Commander’s Independent Thermal Viewer) while keeping an eye on the IVIS (Inter-vehicular Information System) tactical map and even the extension to the Gunner’s Primary Sight.

This would all be a blast if the controls weren’t ripped straight from the lower bowels of Hell. To be blunt, it’s virtually impossible to look around in this game – panning the gun or the commander’s thermal viewer is sheer torture with either mouse or keyboard. Fine tuning the main gun for precise shots as the gunner is nigh impossible, and the addition of only two zoom levels ensure that your targets will either appear too distant or way too close. You can only pan the outside camera using the NUMPAD keys, and it moves so slowly that you could swear it’s mocking you.

All of this means that you’ll have to rely on the auto-targeting feature far too much – in other words, you let the AI focus in on nearby threats and fire with pinpoint accuracy. But this quickly becomes boring and repetitive, and the system can break at times – on purpose when enemies launch smoke screens to conceal their positions or by sheer bad programming (auto-targeting inexplicably won’t work at times, even when it clearly should). As a final insult, the game doesn’t let you reconfigure the controls or increase the resolution beyond 640×480 – yay! It looks fun, but the controls make it impossible to aim with the mounted machinegun. Some extra material on the Abrams.

Tanks But No Tanks Enemy AT soldiers make an appearance.

The engine completes an already grim picture. Using NovaLogic’s dated Voxel Space, an engine noted for being notoriously slow and hard to accelerate, Armored Fist is every bit as glitchy and sluggish as Delta Force 2. It’s not that these games look terrible (they don’t really), but instead the problem lies in the engine’s propensity at gorging up system memory like crazy. Despite the low res graphics, AF3 could barely hold it together at 25 fps on a modern rig, a problem which seems to originate from the game’s glitchy engine rather than its requirements. Needles to say this is inexcusable.

To be honest, I’ve been trying to play and enjoy this game for the past 15 years, if nothing because I’ve always wanted to try my skills at a semi-arcade modern tank simulation. Having seen that there’s no hope for this game or the series, I’ve unreluctantly deleted Armored Fist 3 off my computer and will never touch it again in my life. 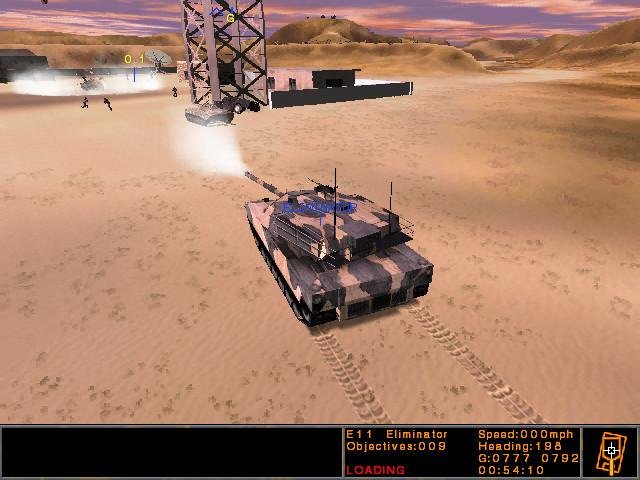