Awkward controls and a high maintenance engine stop Armored Fist 2 in its tracks. 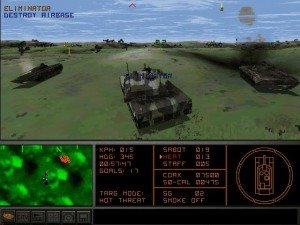 The first Armored Fist, which used the original Voxel Space engine, was rightly criticized for its problematic graphics and gameplay – the engine was great at displaying large environments but looked really crude up close, and the controls were too clumsy for players to become comfortable with. It was hoped that with Armored Fist 2 NovaLogic had learned from its previous mistakes and might implement, akin to their flight sims, an arcade but enjoyable take on the M1A2 battle tank. What we got instead was an armored fist to the proverbial mug.

The game has two modes of operation, what they are falsely labeled as Easy and Realistic – falsely because Easy can, at times, be quite challenging, and Realistic is only “realistic” within the structure of the game. Even on the latter mode the game throws few semblances of authenticity your way. For example, the MPAT and STAFF rounds have been merged into just the STAFF round (essentially allowing you to take down enemy aircraft with the cannon), the terrain heights have been exaggerated wildly, the opposition is exaggeratedly numerous, and the tank still performs wonders that the real M1A2 driver can only dream of – have you ever seen a multi-ton Abrams crawling along the face of a 40 degree slope?

You have a choice of seat hopping between the commander, driver and gunner’s perspective (the loader and janitor are off limits), but typical control of the action is about the same regardless of your viewpoint. Worse still is when you, as the commander, use the CITV (commander’s independent thermal viewer) to search for and designate targets, the game often doesn’t choose the target you are trying to designate. Sometimes it chooses a nearby target, sometimes it chooses something 90 degrees off the direction you’re looking towards. In essence, the onboard station modelling is a complete waste as far as gameplay is concerned.

Overall, the game relies too heavily on the auto-targeting feature (essentially tapping a key so the on-board computer focuses in on nearby enemies) in place of implementing a fluid camera control for you to scan the landscape and take your own shots. Manual gunnery (where you actually must adjust the gun for elevation in trying to hit a distant target) is so cumbersome here and the amount of enemy encounters so vast that it’s woefully impractical. 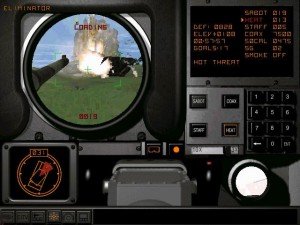 This station has a wealth of info, but not enough control of the camera and gun.

Performance-wise this here’s a real hogger, topping as one of the most resource intensive MS-DOS games out there, if not the most. Although it does install and run on Windows 95, it’s generally more stable on DOS. On modern DosBox it runs like crap on low-end systems, so don’t even bother if you have a slow rig that’s not running a native version of DOS. So what we have is a game that runs badly, isn’t as realistic as it claims to be and is hard to control and enjoy even as an arcade game. You might encounter some semblance of fun after mastering the controls and achieving tolerable framerates, and the graphics and sound are actually above average, but too many assorted flaws bring this game down.