Across the Rhine is an oddball mix of tank simulation and strategy set during World War 2. Itâ€™s also a monster of complexity that will rightfully scare off most people, requiring almost as much time to master as Harpoon or Falcon 3.0. As a combat game, it’s weak. Upon entering battle, I found it impossible to control my tank: it spun around helplessly in one place. I could turn the gun with my joystick, but could only raise and lower the sights by using my mouse. Obviously, you canâ€™t do both simultaneously, unless youâ€™ve got an extra hand or two. A little bit of tinkering enabled me, finally, to control the tank. Even so, I found the first-person gameplay so frustrating that I finally set the thing on computer-control and never looked back.

The gunsight view is so restricted, and the targets so small and twitchy, that long-range shooting is impossible — in numerous battles, I hardly saw an enemy target and, as far as I know, never hit one at a range greater than 200 yards. The final aspect of the game, the strategic one, is where things start to liven up. The career module is well designed and full of nice touches, such as the daily combat diary and the evolving campaign map. It intelligently simulating the responsibilities of command at either the company or battalion level. The AI seems unusually flexible and plausible, and when you zoom in to watch the action, the graphics are good. Thereâ€™s real satisfaction in calling down an artillery strike and then watching the vivid results when your guns clobber an enemy formation.

On this level, the feeling of authenticity is strong. You receive orders from the HQ above you (generated by changing events in the overall campaign), then you study the map and the status of your units and devise a perfect plan for meeting your objectives. Movement is plotted with a simple waypoint system. All the standard armored formations are available. Orders can, and often will, be altered in battle, of course, and itâ€™s easy to access the proper screen (once youâ€™ve figured out the strange interface, that is).

Across the Rhine definitely has merit, at least on the operational level. But the price of admission is high: the basic interface conveys, at first, a sense of overwhelming confusion. The combat isn’t much better. At the end of the day, it seems like MPS Labs made a great strategy game, and grafted a clumsy combat game on top of it. 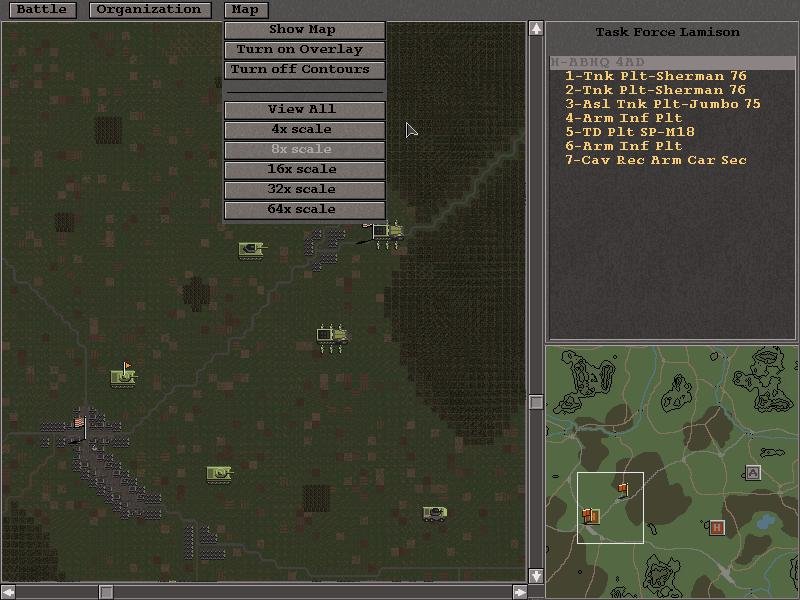