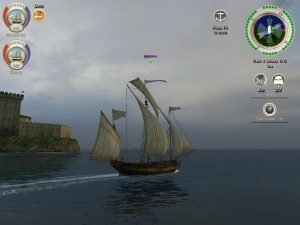 Pirates are cool. Crafted by Akella, the developer who worked on the sea-faring adventure Sea Dogs, Age of Pirates: Caribbean Tales blends Sid Meier’s classic Pirates! with a heavy dash of realism and depth. Imagine if Bethesda took Oblivion out onto the high seas. Of course, that’s not quite enough imagining, as AoP features the ability to capture and control ports, hire crew members to fill out individual roles, and rival factions fighting for dominance of the Caribbean.

The game is very much Sid’s Pirates from bottom to rum-filled top. You can walk around towns, talk to people at the local tavern, ferry local passengers, receive missions from governors, outfit your ship and finally set sail for the high seas. What it does bring to the party is an RPG-style levelling-up, and a picturesque engine that renders some fine sunset views. Watch as your crewmen scuttle among the rigging, marvel at the rippling, reflective ocean.

It also offers quite a lot of freedom in how you want to set the difficulty, although you’ll have to play through it at least twice to absorb any noticeable differences. You can actually tweak things such as frequency of enemy encounters, AI options and the balance of ship cannons. Once you’ve built your play style, you’re dropped into the Caribbean without much explanation. Immediately a man approaches and offers a package from your long lost father! A little corny and old school but it works.

The main workings of the game are explained by the inhabitants of this starting town. Various people explain to you the basic workings of this gameplay feature or that gameplay feature (in text form, there is virtually no spoken dialogue). But exploring towns on foot was never interesting. It’s hard to pin down – it might be the oddly positioned third-person camera or the lack of personality of the NPCs, but the ‘roaming around towns’ portion of the game feels contrived. It’s only when you set sail and witness your majestic ship that you’re reminded that you’re playing a naval simulation.

The game also really fits into place when you first engage in naval combat, although it’s not exactly smooth sailing at first. Success in fights is very much dependent on the quality of your crew and character, and as such you’ll have a hard time hitting anything at first until you grind your way up to a more competent officer and Gunnery skill. 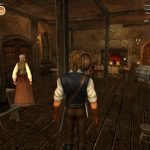 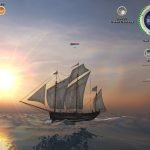 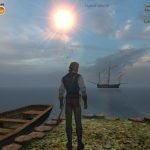 The selection of weapons, however, is impressive. You’ll have a certain amount of cannon balls, from chains for masts, grape shot for anti-personnel and sails, and explosive rounds to wreak further havoc. The targeting interface, which pops up when you personally fire the cannons, is hit and miss, resulting in many tense moments. The last novel aspect of this game is that lets you assume your captain’s point of view during combat, allowing you to walk around your ship and look through your spyglass. 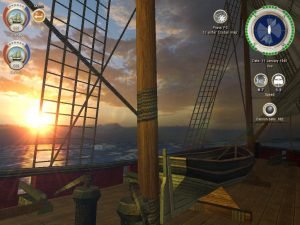 You can do a bunch of things to improve your lot in Age of Pirates. You have the usual missions given to you by various governors, but there are also many random side quests. You of course have trade routes to discover, selling all manner of exotic goods as in a regular trading game. You can not only trade in goods, but also people. You can board a ship by getting close to it, and capture then sell the enemy crew into slavery. Various upgrades, and 16 different ship classes, allow you to continually upgrade and engage in more spectacular naval dogfights, and even attack entire fortifications.

As in Sid’s Pirates, fencing is also a factor (and an upgradeable skill), but this too takes a backseat to the ship-on-ship combat. In the grand finale, for instance, you face off against the enemy captain with a variety of sword fighting maneuvers, all of which are lame and boring. If you’re lucky enough to survive this madness, you can take some serious loot, as well as slaves, to sell about the islands.

Sailing the 17th century Caribbean isn’t all it’s cracked up to be. With a disposable story and main questline, you won’t find much hand-holding in this title, and virtually zero plot. In every respect this is a Pirates knock-off with much more in-depth ship combat, a Privateer or Freelancer with clippers and flintlocks.