On one level, Age of Empires is simply a real-time strategy game (like Warcraft II) with Assyrians and Babylonians instead of orcs or aliens. Gameplay will be instantly recognizable to anyone familiar with the genre. Each player has a group of units, ranging from basic builders to powerful warriors, and a host of structures ranging from humble houses to towering temples. Starting with but a few lowly units, players gather resources and research technologies, all the while building up power and increasing their numbers. A click-and-drag movement lassos a group of units; a right click sends them off to battle. Up to eight players can struggle for dominance, including over the Internet, and custom maps and scenarios are of course supported as well. So far, so â€“ familiar, if not boring. Yet, on another level, Age of Empires is much more than the sum of its parts. The single most compelling aspect of this game is its feel, its atmosphere. Instead of science-fiction, or fantasy, the game draws on ancient history for its inspiration. No, this is not a serious historical simulation, but there is real history in the details that make up each civilization. There are twelve different “empires” to chose from â€“itself a significant leap beyond the normal two or four â€“ and each one is actually, meaningfully different.

Each civilization has its own strengths and weaknesses, loosely based on their historical characteristics: the Assyrians field a mighty army, the Phoenicians a powerful navy, the Persians hosts of elephants. The civilizations differ in economic and technological terms as well, with some boasting better farming and others faster villagers, for instance. With the default technology tree in place, each civilization also has its own, unique research path. One will develop the most powerful ships, but never get the best archers. Another might aspire to powerful Legion infantry, but be sorely lacking in cavalry, while yet another might be ignorant of siege craft but be blessed with extremely effective holy men. Winning with the Hittites, then, requires a very different strategy than winning with Yamato. Even the interface screen changes a bit to reflect the different cultures in play.

Ensemble Studios has done a good job in making each civilization look different as well as act different. Basic structures for all empires are identical in the Stone Age, where most games begin, but at each successive Age (Tool, Bronze, Iron) the buildings take on unique aspects. By the time players are well into the game, each side looks different enough that the fiction of controlling distinct civilizations is maintained. Other visual touches are spot-on as well. The gradual deforestation of the land is marked by tree stumps littering the plains, while beasts slain by hunters gradually decay into bleached skeletons to dot the landscape. There are several types of trees (with differing values as sources of lumber), four types of animals (not including the birds that soar overhead), fish, and whales which can be harvested, along with gold and stone. The world map, though smallish by imperial standards, is nicely contoured, with hills, cliffs, and beaches. Elevation matters in combat, and units move faster going downhill than uphill. The overall look of the game is thus very detailed, and very satisfying. A full-featured editor is included, so custom scenarios should be ubiquitous with time. This campaign map is a nice touch, but it’s more about a pretty picture than tactical awareness.

While the mechanics of Age of Empires are simple, the underlying structure is a bit more complex. In a random game, the most common sort of contest for the solo gamer, each civilization begins with three villagers (the only units which can actually build) and a town center. Each center supports up to four units, and each house built thereafter supports an additional four units, up to the maximum of 50 units a side (more or less). Each villager costs a certain amount of food, while combat units cost various combinations of food, wood, or gold. Every civilization can build the basics, but advanced structures depend on the culture’s specific technology tree, and some cultures get bonuses unique to them.

Where Age of Empires shines is in the diversity and detail of its units. Depending on the allowed technologies, a civilization might develop multiple variations of siege engines, archers, infantry and cavalry units. As each civilization has different abilities, and no two are precisely alike, this assures that combat between players will likely also be combat between opposing tactical systems. Some units, like priests, offer capabilities that, if not unique, are unusual and extraordinarily well thought out. Priests can convert enemy units, breaking up attacks and providing free augmentation to the recruiter’s intake (and unlike new construction, these conversions can occur regardless of how much housing a player has).

The game isn’t flawless, by any means. Players expecting a serious historical sim will be disappointed. It’s really tactical combat mated with a strategic resource engine, not a true “strategy” game by the strictest wargamer’s definition. Nonetheless, Ensemble and Microsoft have delivered quite a masterpiece, a game no one should scratch off their list without a good, close look. 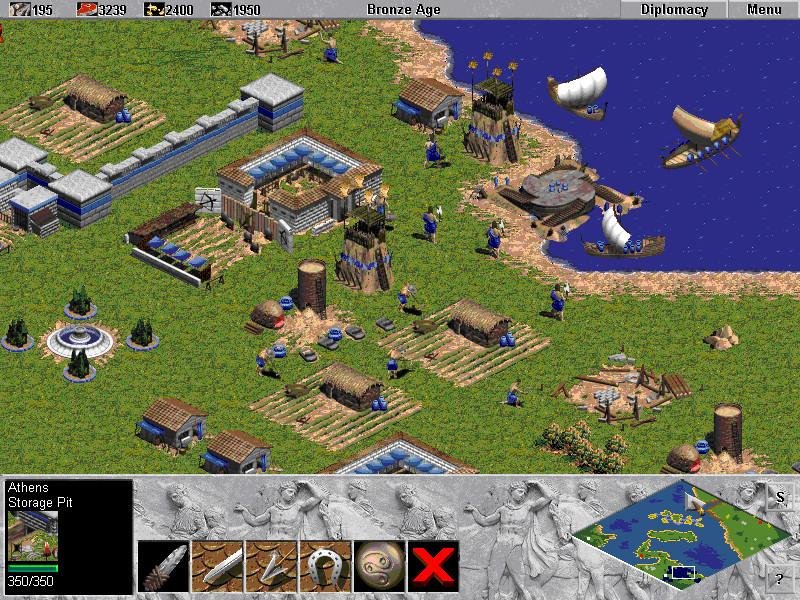