Squishy and squirmy, but not quite up to Armageddon.

Those who think turn-based strategy is all stuffy civ-building and coin-counting have never launched an explosive granny whilst firing away in a jetpack. Worms World Party gives us our fourth trip to the Worms universe, and the wacky combat will entice more than a little deja-vu. Controlling a team of worms, you square off against opposing teams — either AI or human-controlled — in an explosive turn-based deathmatch over destructible terrain using all manner of hilarious weaponry.

As in its parent games, World Party’s action is anything but serious. Launch a herd of Mad Cows down a slope, throw the Holy Hand Grenade, or steer the flying Super Sheep towards its target — plus trusty regulars like the Bazooka, Shotgun, and handy Ninja Rope. With these you off enemy worms, traversing a treacherous landscape to nab power-ups and find the safest spots to rest between turns. 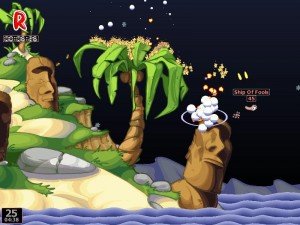 This cute worm is about to become fish food.

If World Party’s weapons sound a bit familiar, it’s because, in an extremely disappointing move, the designers haven’t expanded the arsenal at all since Worms Armageddon. Fortunately there is some new stuff that goes beyond the menu dressing, chief being a new ‘fortress mode’ that stacks worms in their own opposite strongholds, 45 new single-player missions, 19 training modes, and 16 time-attack missions. As always, the singleplayer missions are grueling and not much fun. Hidden in the options menu is an encyclopedia that offers interesting strategies for each weapon directed at would-be pros.

The multiplayer game modifiers — arranged in a slot-machine interface called the Wormpot — give way to some gameplay variety: Sticky mode keeps grenades from bouncing; Super Rope mode lets you swing farther and wider; God Mode turns worms invulnerable to everything except drowning. On the lower end you get some odd limitations to the interface that weren’t there in Armageddon – not being able to preview maps before committing to a match, unable to fine-tune round time, hitpoints or mine/barrel quantities, and general slow-downs brought by the (too) colorful interface on lower-end systems.

There’s not much here that you wouldn’t get from just playing Armageddon, but for people late to the scene it’s a nice package to try. Those who’ve played WA to death won’t get much out of it, however.