Wing Commander 2 is the long awaited sequel to the first game. Based in the same universe as the original, Wing Commander 2 improves the graphics considerably, forwards a good story and gets rid of a ton of bugs. 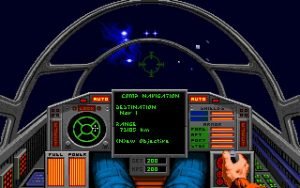 The intro explains the plot. The game is set ten years after the first Wing Commander ends. The TCS Tiger’s Claw has been destroyed in a surprise attack by the Kilrathi stealth fighters. Only our hero has seen the fighters, since the Kilrathi destroyed the production facility to stop it falling into rebel hands, and he’s considered to be the coward who let the Kilrathi destroy the carrier. Now the stealth fighters are back, and proving they exist is a major goal in Wing Commander II.

Combat is fast in WC2, and it shows that most of Origin’s time and money went into making it more streamlined than it was before. The flight behavior remains as implausible as ever, however. Crafts can make very tight maneuvers, shed speed constantly and stay in close contact with no troublesome limitations like forward momentum keeping you off balance. It’s actually a good thing, since the lack of realism makes this arcade shooter more fun.

All of the combat graphics have been bettered. The new craft have bigger cockpit canopies, giving a greatly improved view of the action. And the controls look much more real. Voiceovers are now also a thing, so you can hear wingmen replying to their orders. New military abounds in WC2, with the only familiar piece being an upgraded Rapier. Particle Cannons replace Neutron Guns for added range, and chaff pods improve missile defenses. New craft become unlocked as you go, including a bomber.

Overall you get the right upgrades and tweaks with Wing Commander 2. It builds upon and expands what the previous game did right and better streamlines the combat, which is really the best part of the game.