A packet of new levels from the original creators of the game.

This expansion pack features the return of the nameless prisoner from the original game, now sent back to the planet he/she escaped to retrieve some sensitive data from a downed terran vessel. You, of course, play the role of the luckless lone retriever, who must battle over fifteen levels and face new foes. The game starts promisingly enough, with a colorful engine-rendered cutscene depicting your zero-G salvage and immediate return to Na Pali.

There’s not much of a story to speak of, though you can follow some semblance of a plot by reading scattered logs and diaries found on or near dead bodies. Then you have your own log entries, which are periodically spoken between levels. It’s a nice touch, but one that’s ultimately useless as they tell nothing you didn’t already know. The original Unreal was a breath of fresh air thanks to its large outdoor levels that were miles away from anything the competition could produce at the time. Na Pali takes that same route, depicting outdoor levels that are larger than ever. The very first map, for instance, takes a good twenty minutes or so to fully navigate, with lots of crossroads and dead ends in between. I get where the level designers were going, but the end result is a lot of walking and less shooting, though some mountainous levels, like the awesome ‘Spire Valley’, do indeed work wonders on the senses with their colorful lights and dreamy music.

Many levels have that subtle Unreal charm that make them stand out (little surprise considering how some of the levels were betas that never made it into the original game). Level themes vary greatly as well, with maps ranging from ancient Nali temples, humble villages, alien installations, a crashed starship or a winter wasteland. The game runs nice and well until about halfway in, when you find the aforementioned downed ship and come under a massive attack by one of the expansion’s new enemies – the space marine. These guys pack some serious punch and come in crowds, turning this part of the game into the most frustrating piece yet. Survive this ill-conceived onslaught and the game will go back to normal. A marine beams down, eager to ruin your day.

This is an expansion pack, and as such you’ll have at your disposal some new weapons and enemies to deal with. The former cast of aliens has been enlarged with three newcomers – the acid-spitting spider, a fast dog-sized raptor and the space marine described earlier. We have three new arrivals in terms of firepower as well, namely the CAR (Combat Assault Rifle), a grenade launcher and rocket launcher. The assault rifle is available early on and will prove an efficient rapid-fire weapon. The grenade launcher does just that – launches grenades at a high arc that bounce around; and the rocket launcher delivers both standard and homing rockets.

These more earthly weapons aren’t in the same vein as Unreal’s high tech gadgetry, and I couldn’t help notice they don’t actually complete the armory in any meaningful way. The minigun was a good enough assault rifle while the Eightball worked both as a rocket and grenade launcher. Were these additions really necessary? The CAR also has the unfortunate effect of being too powerful. With its great rate of fire, null recoil and awesome accuracy, it has the ability to shred any small to mid-sized opponent into bits in seconds, provided your aim is good. This is the main reason why the space marine is so deadly, and I imagine the CAR to be just as unbalanced in multiplayer as well.

There’s not much point in expanding what’s already clear. If it’s more Unreal you’re after, then the official mission pack offers just that – a thinly veiled excuse to romp through levels pieced together by the original design team. 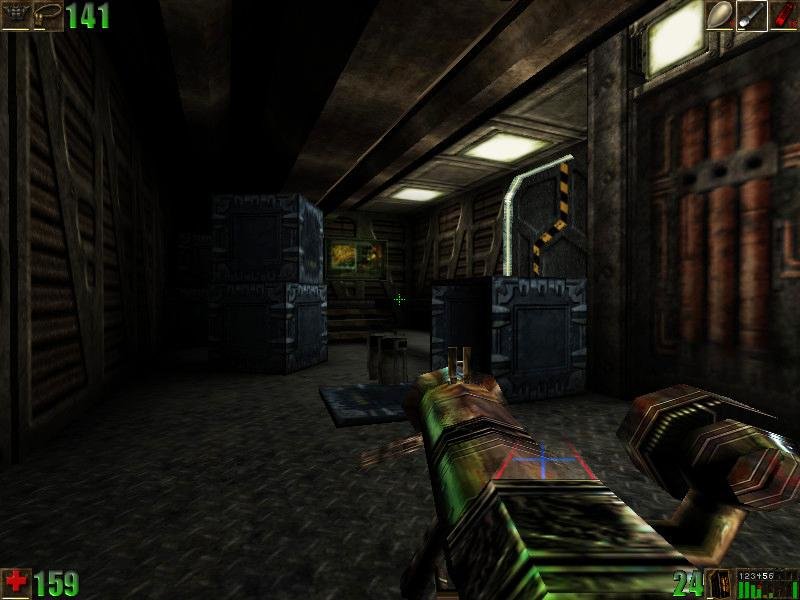