Dare you embark on Ultima VIII?

Ultima goes way back. The first game was made in 1981 for the Apple II, but it was with the superlative Ultima VII that the series had really matured. Alas, Ultima VIII: Pagan isn’t exactly a worthy successor. It’s definitely an Ultima game, with a new story, cast of characters and similar gameplay. But Pagan strays twofold – first because it was released in an embarrassingly unfinished state, to the point where it was borderline unplayable in some parts, and second because of its pacing having shifted more towards action.

The plot starts off interestingly enough. The Guardian has a bone to pick with the Avatar after the end of Ultima VII, so he banishes him to a world crushed by the forces of the Elemental Titans called Pagan. It’s a dark place to be trapped in, but find a way out of there you must, constituting your main objective throughout Ultima VIII as the (ex) virtuous Avatar. You’ll be going through this journey alone, since Pagan lacks a party system. This does has some upsides, since you’ll be spared your companions’ incessant whining and walking into traps, but it also strips the game of an added layer of complexity.

The citizenry of Pagan, from the village of Tenebrae to the Hall of the Mountain King, seem entirely willing to answer any bizarre questions you ask about your predicament as you struggle to escape the land. Unlike previous games, though, no character portraits appear when you initiate conversation, an aspect that further detracts from the endearing atmosphere of previous games. It just doesn’t make you as interested in the fates of the people in Pagan.

But that’s cool, since the main philosophy behind Ultima VIII was to make it more exciting and action-oriented. To this end you have a more dynamic set of movements – jumping, climbing or dodging – but these new controls are anything but fluid. An infuriatingly uninspired platforming bit will make you hate Ultima VIII to its very core. In several parts you have to hop your way across small islands like you’re Mario with a bucket on his head, and each slight miscalculation leads to your demise. A subsequent patch made these jumping puzzles less of a headache, but it’s still a pointless annoyance at best. 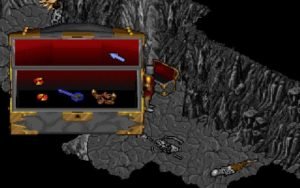 Real-time combat is similar to but more difficult to deal with than that of Ultima VII: The Black Gate. There are plenty of weapons and armor from which to choose and each weapon, such as the ever-popular undead-crushing mace, has specific strengths against different types of monsters. The magic system is new, though more of a chore. You can forget the simple spell book found in the previous game, since here you have to contend with a nightmare of multiple systems with their own requirements.

Necromancy spells require reagents, an empty bag, and a magic item. You put the reagents in the bag, then use the item on it to create a token. Clicking on the token releases the spell, and the token is used up. Each spell requires s different token. But of course the game isn’t limited to Necromancy, as each other magic school has a slightly different method for creating spells. Again, this is a new, creative magical system, but it’s also horribly confusing.

Sorcery spells are the most complicated. Here you enchant an item at a pentagram, which is a tedious process. First you read the spellbooks at the library and write down the process. The books only mention of red candles around the pentagram. From another book you have to infer that black candles must be placed at any point that doesn’t have a red one. Next comes the placement of reagents. Then the item is to be placed on the center, click on the pentagram and hope for the best. Down it all falls

Worse yet are the host of bugs and general idiosyncrasies, some major and others minor. Weak points in the plot, the linear world, hollow conversations, similar-looking levels (rocks, lava, rocks, water, rocks, etc.), level design bugs, level design annoyances like trapping every chest, or just the general apathy of this mess of a game all but begs you to put it out of its misery with a merciful uninstall.

Pagan has long been considered as one if not the worst Ultima game, and not without reason. Earlier adventures built upon the strengths of each previous title, something Ultima VIII: Pagan fails to do as it tries to re-define the Ultima series on one hand, while suffering from a cavalcade of bugs and unfinished features on the other. In any case, it’s a cautionary tale on how not to hammer a beloved series into its own grave.