Anyone here remember the great Kurtis Trent? No?

The lesser Tomb Raider games were sunk not because of the lack of a new engine, but due to a lack of polish and, more importantly, a general move away from what made the original so compellingâ€”the idea that you were a female Indiana Jones. Exploring poorly rendered outdoor areas and blocky modern cities doesnâ€™t quite have the same kick as exploring ancient tombs full of traps and monsters After a three-year break, the long awaited Angel of Darkness brings Lara Croft back toâ€¦ exploring cities; Paris and Prague, to be specific. At least they look better courtesy of a new, more powerful graphics engine. You get to explore exotic tunnels, sewers, and apartments as you uncover who killed Werner Von Croy, the guy that left Lara for dead at the end of Revelation. You also get to explore some archaeological digs below the Louvre, and thatâ€™s where the game comes into its own. But the highs are way offset by too many lows.

Though the production values are quite good, the story is very cheesy. There are also gaps in the storytelling, and the introduction of a second playable character smacks more of a triumph of marketing than of gameplay. The levels are a decidedly mixed bag. Most look good, but are full of illogical button flipping (who designed these places?), and no real puzzles of any merit. Completing the game is more an act of surviving the interface and some truly awful boss battles.

Despite what is described on the box as a â€œbrand new ultra-realistic game engine and control system,â€ Angel of Darkness looks like a slightly updated version of the older games, with the same sluggish controls that were acceptable when the game debuted in 1996, but are nearly useless today, especially in light of other third-person 3D games that get it rightâ€”whereâ€™s mouselook? Thereâ€™s almost no connection between your keypresses and Laraâ€™s movements on-screen. She feels like sheâ€™s moving through molasses, and every animation needs to play to completion before the next input is allowed so Lara still moves with long, uninterruptible strides. In fact, theyâ€™re the same animations seen from the first game. Lara has few new tricks stuffed away this time. Thereâ€™s a neat new â€œrunning up stairsâ€ animation, but trying to turn while in mid-trot causes her to spin around wildly. The biggest new gameplay additionâ€”an energy meter that gradually decreases when Lara climbs, causing her to lose gripâ€”only serves to eliminate some of the exploration of the early games. Thereâ€™s also a pseudo-role-playing element where Lara needs to increase her stats in order to, say, make a certain jump. â€œMy legs feel stronger,â€ she says, but itâ€™s just another switch that needs flipped before you can progress in a level.

The new stealth features are useful maybe once or twice in the entire game. Thereâ€™s also a new playable character that has to be one of the most generic hero in all of gaming – Kurtis Trent. God knows he has the name for it. But he may as well be Larry Croft, since he has the exact same moves and capabilities as our heroine. Why heâ€™s even in the game at all is a mysteryâ€”it is, after all, technically called Lara Croft: Tomb Raider: The Angel of Darkness. At the end of the day, neither Kurtis, Lara or the new engine are enough to save this game. 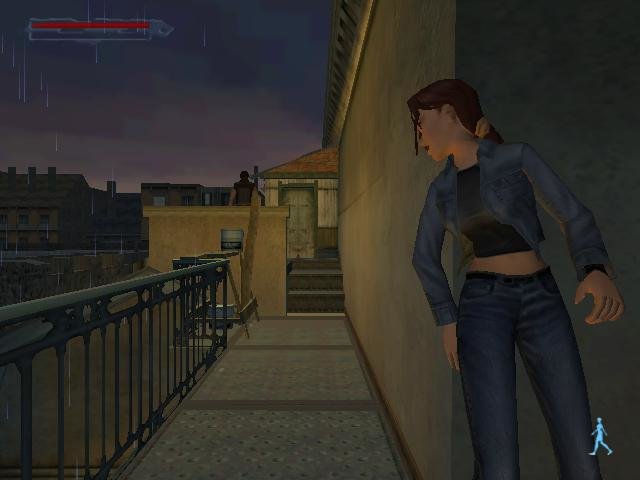