TDS has plenty of atmosphere.

For those new to medieval home invasion, the Thief series is all about kleptomaniac extraordinaire Garrett engaging in the art of thievery in a Victorian-esque city of magical intrigue and industry. Being a natural sneak, Garrett goes about his existence breaking into wealthy establishments and generally taking anything of value that isn’t nailed down. The original Thief games pioneered stealth with their clever level design and gameplay, being dubbed by its creators a ‘first-person sneaker’. About four years and numerous setbacks later we have the third official Thief release, but can it measure up to past iterations?

Yes and no. On the bad side of things TDS is knee-deep in Deus Ex 2’s game engine, using its bite-sized level design and questionable artificial intelligence. To some extent it works against what the series has stood for (the simplified level design tops on my list of grievances), but on a positive note the engine does bring with it many advantages, chief of which are the graphics. Hands down, no amount of tinkering could have elevated the aging Dark Engine to this level of visual quality.

The real-time shadows in particular look excellent and enhance gameplay, as now you can spot shadows cast by guards around corners or even allow them to wield torches while patrolling. Normal maps give environments a lot of crisp detail at low system costs, and there’s so much highly saturated color and fancy architecture everywhere that you’ll often just pause and go “Wow. That’s cool”. Bodies collapse like sacks of jello courtesy of  screwy ragdoll physics… On the brighter side this guy can scratch his ear with his foot.

So what exactly is Thief: Deadly Shadows, and just who are these ‘Keepers’? You don’t need to be familiar with earlier Thief games to enjoy TDS, and even if you do you won’t get much extra out of the mish-mashed storyline. The game starts innocuously enough with a tutorial cleverly disguised as a burglary mission, after which the story kicks in and you find yourself entangled in a confusing web of prophecies heralding the arrival of a new age of bad things to come. The Keepers, a secretive group of observers with shady motivations, are at the center of this all, and they need your services to figure out what’s looming just ahead.

Past Thief games let you unravel the campaign in a mission-by-mission order, but here there’s a nice free-roaming aspect that lets you explore the city, shop, attempt missions and engage in a little freelance burglary, all at your own pace. The stuff that you find can then be sold and the cash used to buy equipment for upcoming missions. To some extent this is an enjoyable exercise lending some validity to Garrett’s nightlife, but once you have to sneak through the same city streets again and again, it becomes repetitive filler. The city itself is less than overwhelming – while undoubtedly detailed on a micro level, the locations are so minced up that you’ll encounter a load screen around every corner. As such you’ll have to level hop a lot to get your final destination, which ruins any illusion of a sprawling metropolis.

This approach of scaling down levels further extends to individual missions. Remember those huge levels from Thief II: The Metal Age, where you’d spend hours just exploring and soaking in the magnitude of the world? Deadly Shadows has none of it. Missions are reasonably long if not particularly large, and they’re always artificially extended by having several levels stitched together via loading spots (loading itself is by no means a fast process). But like the outdoor city areas, the usually indoor missions suffer from ubiquitous level splicing which hammers home the feeling that you’re always trapped in a contained area. Few of the missions are as memorable as those in the original on top of it, with the possible exception of a haunted orphanage encountered halfway in, or the atmospheric Hammerite Monastery. You can fence stolen stuff for money. 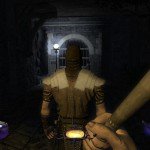 Time to put this guy into a coma. I always take out the trash!

Picking up the pieces The graphics in TDS, especially the shadow effects on characters, look superb.

Other minor transgressions encountered on the unpatched version include an assortment of bugs (such as one that freezes your character animations), voice acting that’s sharp enough to make your ears bleed (Pagan voices offend the most) and a generally simplified armory. Although you have a reasonably broad selection of tools to shop – including a familiar assortment of tactical arrows – you’ll find yourself going by just fine without. Most of the game can be completed with just your trusty blackjack and water arrows, plus the easy availability of gold will mean you’ll always be overstocked on stuff you won’t need, making the game rather easy.

But Deadly Shadows is by no means a terrible game, or even a mediocre one. Some of its issues are inherent to the engine powering it (no surprise considering it was developed alongside Deus Ex 2) while others are the result of rushing it out the castle gates before it was done. Longtime fans of Thief should find marginal enjoyment with this product, but casual stealth players looking to play the medieval equivalent of Splinter Cell will find plenty to like in Deadly Shadows.