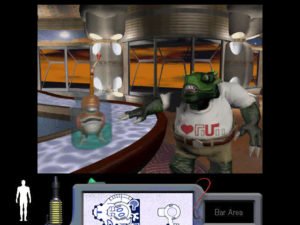 In The Space Bar you are Alias Node, intergalactic trooper, in hot pursuit of some serious space sleaze. This leads you to The Thirsty Tentacle, a real swan dive among the countless other clubs and discos in this corner of Armpit 6 (the friendly Armpit). You’re equipped with a PDA, and a few other techno-goodies, but perhaps your most important investigative tool is Empathy Telepathy, a skill that allows you to see life through the eyes of the suspect – perhaps the most sensational ability a voyeur such as yourself can possess.

Gameplay consists of entering the minds of various aliens in the bar and solving quests in each of their worlds. Meretzky, the mind behind the game, has constructed some of the most devious set of puzzles you’re likely to encounter anywhere. The habitat of each creature is markedly different from one to the next, and his or her biological form often comes into play (quite literally).

For instance, when you become Seedrot, a member of the Vedj race, you are a plant rooted in one place and must solve the entire world from that location (this scenario becomes quite risqué as a roving photographer urges you to “Stroke your buds.”); as Fleebix, the Neblitz, a disembodied brain in a mayonnaise jar (bring out the Best), you are entirely dependent on your symbiotic other, Thug, a Salivraster – all muscle and as dumb as a Pauly Shore film; as Soldier 714-Z-367, a Zzazzl, you view the world through the multi-faceted eyes of an insect, seeing a dozen or so replications of the screen image.

The variety of puzzle types range from the aforementioned maze to a corporate business sim with difficulty ranging from medium to sign-the-commitment-papers. Each scenario is likely to take even the most seasoned adventurer between five and 10 hours to complete. Play is mostly non-linear, and the stories may be exited at any time to return to main core of the action, the bar itself. 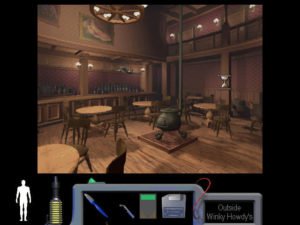 The BAGEL, Boffo’s game engine scrolls smoothly through its 360º transitions; the characters and interiors sport millions of nicely modeled polygons. The quirky aliens look great, but animations suffer from repetitive, uninspired movement and no lip-sync (if the character has lips). It’s a matter of style, actually, but you’ll find yourself wishing that more time had gone into character animation and sound balance. Voice acting is a hit and miss overall, but most performances actually hold up quite well.

Die-hard adventurers will find the odd puzzles from The Space Bar to be as interesting and original as they are difficult. The range of different puzzles, combined with interesting characters and the whimsical plot, help make this game its own circus show.