Few shooters have managed to capture that perfect balance of wit, style, story and smart gameplay, with all too many devs perfectly content in creating merely average Half-Life clones wrapped around forgettable sci-fi environments. Not so with Monolith’s exceptionally original No One Lives Forever, which drops generic science fiction altogether for the swingin’ cool of the 1960s, providing what could be one of the most amusingly vibrant gaming playgrounds in any shooter before or since. 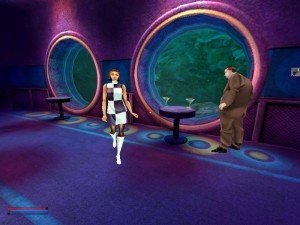 Obviously influenced by James Bond and a little bit of Austin Powers, No One Lives Forever has you star as Cate Archer, ex-thief turned spy for a super-secret organization known as UNITY. She’s not too keen on her low-level job position and is struggling to prove herself to her skeptical male peers. The rise of an equally secretive but less benevolent organization, the aptly monikered HARM, as well as a string of assassinations and rumors of betrayal from within give Cate the brake she so badly needs from her higher-ups, who send her on her first assignment as an operative.

We’ve had female leads in gaming before, but none were as likable, clever or even remotely believable as Cate (voiced by Kit Harris). Being more than your average polygonal heroine with a D-cup, Cate has a nicely written personality and class to boot, both of which come through wonderfully when you start playing the game and follow her dialogue. Sexy yet simultaneously sharp as a whip, she’s the quintessential ‘I can take care of myself’ female character.

Most of the other characters are just as enjoyable, whether they’re good or evil. You’ll almost never find yourself skipping cutscenes, if anything because the cutscenes never feel like repetitive filler shoehorning the story. The only area where they (the cutscenes) lack is the camerawork and the game’s slightly glitchy animations. 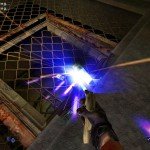 Turn your swanky lighter into a blow-torch. 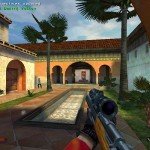 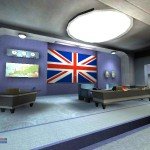 UNITY headquarters, where you receive your pre-mission briefing and new gadgets.

Besides the explosive palette of highly-saturated colors, psychedelic music and clever acting, NOLF Is first and foremost a great game. Unlike shooters before, and even unlike Half-Life, the game constantly throws new stuff for you to do and see. First you’re playing sniper in Morocco, then you find yourself infiltrating Eastern Germany on a rescue mission, then explore a swinging 60s nightclub, fight for dear life on a crashing air plane and sneak aboard an orbiting space station! The amount of kitschy environments is fabulous, many paying homage to classic spy movies. Numerous off-beat touches like letting you ride a bike or swooning an evil business tycoon for valuable information make it even more interesting. 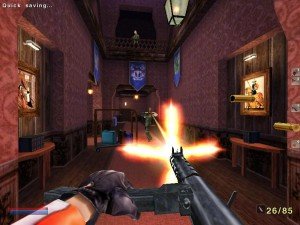 Stealth is usually optional. You can methodically creep through most levels, or spray SMG death.

NOLF blends Thief-style sneaking with run-and-gun action and is different enough to keep veteran gamers on their toes. It’s only unfortunate that the stealth occasionally falters and becomes a tad too difficult to pull through. Take Cate’s noisy high-heels sabotaging any attempt at sneaking up behind guards, or how she can’t carry and hide bodies (instead relying on a Body Removal Spray), while the addition of security cameras scanning critical junctions complicate things even further. It’s fortunate that stealth isn’t always mandatory – you can just as easily blast through some of the levels, but going in superspy and making full use of your nifty gadgetry without causing a ruckus will earn you higher post-mission ratings.

After several years of lackluster game releases, Monolith delivered a truly top-notch title. No One Lives Forever combines a fantastic sense of style with great animation and voice acting, an upbeat vibe, clever AI, industry-leading interactive music, a wry sense of humor, and gameplay that keeps you coming back for more.