The new standard upon which all first-person RPGs will be based.

Morrowind is perhaps the most technologically cutting-edge first-person RPG ever. You start as a newly freed slave in the province of Vvardenfell, where the entire game is set. Youâ€™re unsure of your own past and oblivious to the reasons why the Emperor has released you. At the very outset youâ€™re interviewed by imperial guards, and your answers to their questions shape the character you play in the game. Time to grab me some ale.

From there youâ€™re pushed to begin following the gameâ€™s main quest, which paints you as the principal savior in uniting a land torn by political infighting and years of hostilities. However, right at the start â€” and throughout the rest of the game â€” you can choose the pace at which you pursue this core objective. Morrowind offers plenty of sub-quests to track down and complete. There are Mage, Fighter, and Thief guilds to join, among others. You can be a champion of good, the vilest of thieves, or something or someone in-between. It really is up to you how you play the game, and ultimately what you get out of it.

Eight familiar attributes will help further define your character; these are Strength, Wisdom, Intelligence, Personality, Endurance, Agility, Speed, and Luck. You will be able to play as a High Elf, a Dark Elf, a Wood Elf, a Redguard, a Cyrodiil, a Nord, or a Breton. In addition to the specific traits that are assigned based on your race selection, you can also choose your face, hair, gender, clothing, even your star sign. Political intrigue plays an increased part in defining your role in Morrowind. Guilds and factions, and your alignment with them (or lack thereof) will have marked implications as you travel the roads of Tamriel.

From whence the wind blows

Donâ€™t let the fact that Morrowind is set in one province fool you into thinking itâ€™s a short ride. Morrowind’s landmass isn’t as big as that of Daggerfall, weighing in at a ‘mere’ ten square miles or so. But the minutia of hand-crafted detail seen here far surpasses that seen in any previous TES game, revealing weeks of exploration. You play the game largely by yourself â€” you have no other party members to micro-manage. On occasion, youâ€™ll meet NPCs that will join up for a time. This grouping not only relieves management tedium, but also adds to the immersion as you tentatively build up your persona.

Really, though, itâ€™s the lushly detailed 3D worlds that set a new standard for this kind of RPG. There’s a day/night cycle with wonderful night skies, revealing planets that shift realistically as the weeks go by. Booming thunderstorms in the swamps, blinding sandstorms when venturing out in the deserts, an almost obscene array of flora and fauna, and a commendable level of architectural variety between the many cities pertaining to each race. After a few hours, Morrowind begins to feel like a breathing world.

You also get a rather restrictive yet altogether diverse magical system tucked into that world. There’s a ridiculous number of spells to be discovered, categorized into six schools of magic that covers everything from healing to summoning or plain mass destruction. Even if you’re not a proper mage you can dabble in some forms of sorcery by using spell scrolls or stat-boosting potions. As a mage you can learn a vast array of spells from instructors, or you can create your own custom spells for a price. Hell you can even create your own magical gear if you have the right ingredients – a soul gem with the trapped soul of your slain foe (the bigger the better), the item itself, the learned spell for the enchantment and lots of gold if you’re hiring another mage for the job (you can do it yourself with the right skill). The only problem is that the magic system is pretty restrictive as a whole, especially early in the game – you never seem to have enough mana as a wondering mage, so stocking up on potions is a must (but not always a possibility). Plus the enchanting system requires a lot of unique gear, rare soul gems and a ton of gold to hold any worthwhile enchantment. You can find some good loot in tombs, but they’re usually guarded by undead. The lovely city of Vivec. You can use Silt Riders to travel quickly.

A Matter of Intelligence

A few factors did detract slightly from the immersion, however. NPCs donâ€™t react to the passage of time â€” you can go into any guild, store, house, and so on at any time of day and youâ€™ll find the same people there. I would have liked to see stores locked up at night, and people actually doing stuff that you’d expect them to do – menial chores like cooking and cleaning, or kicking back with some beer and gossiping the latest at the local tavern. We did see this sort of lifelike NPC behavior with German developer Piranha’s Gothic series, but Morrowind’s population is rather stiff and lifeless in comparison.

Finally, the AI pathfinding isn’t rock solid. Monsters often get hopelessly confused by an object, such as a rock, directly in their path, repeatedly bumping into it instead of merely sidestepping it. This problem isnâ€™t a huge deal, but it can kick your ass when you have an NPC tagging along: in my case, a companion (whose company was crucial to completing a certain quest) kept walking into a pool of lava with suicidal glee. That said, the NPCs do react to your actions and remember what you do, which is pretty awesome. For instance, I stole a gem from a traderâ€™s bedroom early in the game, and several weeks later, returned to that same trader and sold it to him, forgetting where Iâ€™d pilfered it from. He recognized the jewel as his, and understandably, all hell broke loose. It was a startling, but pleasant, surprise.

On the whole, my complaints donâ€™t even come close to eclipsing Morrowindâ€™s core goodness. Itâ€™s revolutionary in its detail and in its free-form nature, and is sure to stay on your hard-drive for months. 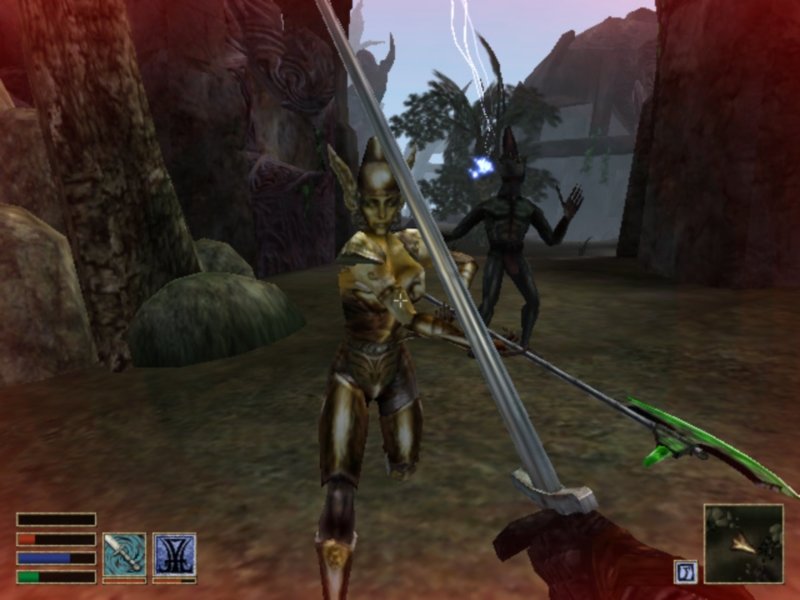