Morrowind was huge, an experience not unlike trying to drink the ocean with a teaspoon. Tribunal added even more to the bulging buffet, cleaning up the interface with an improved quest log and the ability to add notes to the map. Bloodmoon arrives with the same enhancements intact, but instead of limiting you to Tribunalâ€™s indoor creature gauntlets, it digs out an entirely fresh and semi-arctic island to explore. That island is called Solstheim, and after the expansion is installed, sits just northwest of the main island Vvardenfell at roughly one-fifth its size (thereâ€™s a fold-out color map of the island in the box). Stepping onto Solstheim is like getting lost in a Scandinavian dream. Weird boar-riding goblin mobs patrol the wilderness, growling ice wolves roam in packs between the trees and ice flows, and enormous shambling bears prowl on four legs. The foliage is completely new, a collage of green and snow-covered pines, rock formations, half frozen rivers, and ice-covered lakes.

Other oddities abound. Nords, one of the playable races, own the island of Solstheim, having so far resisted colonization by the Dunmer (Dark Elves) that populate Vvardenfell. The Empire is trying to gain a foothold, as usual, but is having problems with its mining colonies. Your role, which varies depending on how you play the game, is essentially to explore the island and assist the various factions along the way.

Just as ingenious as the brilliantly conceived participatory acting sequence in Tribunal, the colony-building gig runs alongside the main quest involving the East Empire Company, which puts you in the role of literally building an entire village from the roots of an ebony mine. This sort of thoughtful scripting what sets a Bethesda role-playing experience apart from its peers. The main quest itself is a well-crafted series of surprises that gives you just enough freedom to pick sides and vary the ending. But don’t expect it to be easy. You should be around level 25-30 or up, and even then you’ll need some quality gear to survive. Fortunately, there’s no barrier to Solstheim, as you can hop a boatride from Khuul anytime. When in doubt, summon disposable skeletons. Nothing beats this Bound Demon Longbow. Then there’s always the option of becoming a warewolf. Playing as a werewolf in Bloodmoon isnâ€™t just an option, itâ€™s eventually a necessity. Becoming a werewolf involves being attacked by a werewolf and contracting lycanthropy. Three nights later (and every night thereafter), you turn into one. Werewolves are an interesting mix of pros and cons – mostly pros if you like to run really fast and jump dozens of feet in the air. In werewolf form, your strength and agility skyrocket, making midnight climbs onto rooftops or bounding over huge boulders a breeze. With all that physical prowess and claws like sabers, your first instinct is literally to run around and take out everything in sight. The reality check occurs the first time youâ€™re spotted by someone during your change. Identified werewolves are scorned on sight, and the game tosses reality out the window by putting the entire â€œworldâ€ on notice forever thereafter, which means they attack to kill on sight. In other words, whatever you do, donâ€™t get caught wolfing out. Other mitigating factors include vulnerability to silver weapons (guess what a great number of folks seem to be packing), and the inability to use weapons, armor, magical items, or cast spells in werewolf form. Most insidiously, you are required to kill at least one non-player character per night.

If youâ€™ve been waiting to pick up Morrowind and the first expansion wasnâ€™t enough to sway you into doing so, Bloodmoon is all the reason you need. Players who tried Tribunal and found it enjoyable but a bit underwhelming, this second expansion is easily the best of the bunch, leapfrogging even the original for buffed up playability. 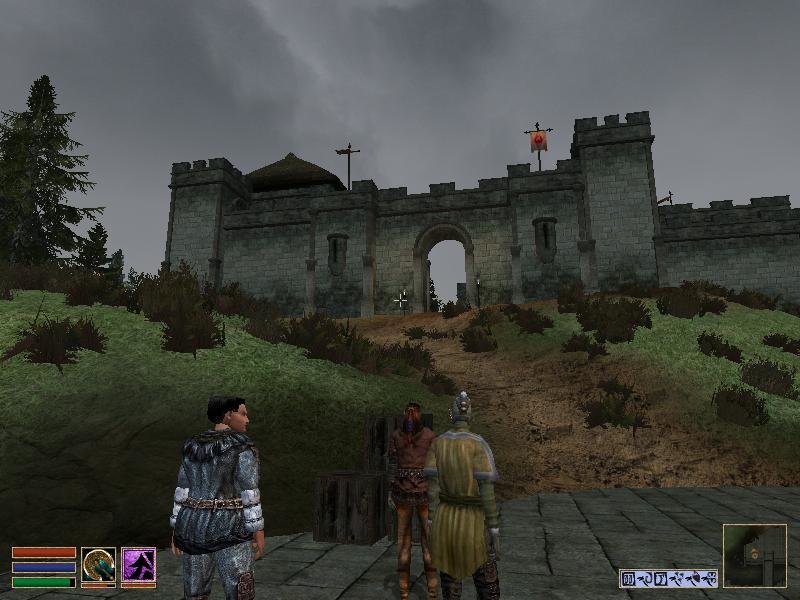