Microsoft’s Wing Commander clone has a lot going for it. An enemy fighter silhouetting against the Sun.

Brothers Erin and Chris Roberts were widely known for Origin’s Wing Commander games, and while Starlancer may not be an official sequel to any of those games, it is obviously a distant cousin. The story and characters are different, but the atmosphere and gameplay are strikingly similar to that of the venerable series. That is not to say that Starlancer is a Wing Commander clone – it has its fair share of differences, but it also shares a number of it’s forebear’s conventions (and flaws) as well. If you played and enjoyed the Wing Commander games, chances are strong that you will enjoy Starlancer as well.

The stage is set a mere century or so in the future. Humankind has predictably expanded into space, but is still huddled inside the confines of our solar system. Much of it has been colonized with the help of a jump drive technology that allows for quick travel over long (but not interstellar) distances. There are a few nebulae here and there, but the effect is pretty muted, and the planets are the main visual draw.

Various factions are competing for power and resources, while borders are still drawn in roughly the same places that they were during the Cold War. The Alliance represents democracy (i.e. the western nations of Earth), while the Coalition is a dark boogeyman composed of eastern nations such as Russia and China. It’s an effective contrast, especially considering how difficult it can be to get players to empathize with unfamiliar settings and characters.

In the game’s opening cinematic, the Coalition offers the Alliance an olive branch. They are to meet in orbit of Earth to discuss terms of peace and an end to their ongoing conflict. We know better, of course – the peace gesture is a diversion, and the real intent of the gathering is the destruction of the Alliance fleet at the hands of the wicked Admiral Kulov (who just happened to bring along a massive squadron of cloaked fighter craft; go figure). From there the story chronicles the ragged retreat of the Alliance forces to Neptune and later confrontation with Kulov.

And now for something completely similar

The story tends to be a bit predictable, and it recycles just about every space sim plot device ever devised. The Coalition has cloaking device technology at the start of the game, but of course the good guys don’t get it until much later. One of the opening videos, in which a Coalition ship de-cloaks directly behind and unsuspecting Alliance fighter and blows him to bits, is very nearly ripped from Wing Commander IV, and it doesn’t take much to reach the familiar “destroy the super carrier before it’s operational” or “sneak into enemy territory with our stealth technology” missions. Not all levels are that predictable, of course, and overall the story flows well and the universe is nicely represented. For instance you can browse through news channels between missions.

And in fact a lot of Starlancer’s missions are quite fun, and several of them are absolutely stunning. They throw unexpected events at you as a matter of course, and you will have to do a lot of thinking on your feet (or in the cockpit, as the case may be). Visually they get a lot of help from the game’s engine, which hands out spectacular backdrops and flashy effects in turn. Many space sims have turned to colorful nebula effects to “dress up” the drab emptiness of space. Starlancer goes a little bit lighter on the nebulae and instead relies on planetary vistas – recognizable ones at that – to inspire awe. Imagine fighting a huge space battle on the dark side of Saturn.

While most of any given mission is scripted, there are enough dynamic elements along the way to keep them from feeling scripted. What you doâ€”and what you fail to doâ€”can have consequences later in the mission, and sometimes in other missions down the road. Did you fail to take out that Coalition ace? He might just show up later. Ditto for that carrier that you let slip away.

The game could do a better job of letting you know how well things are going during a mission, howeverâ€”the Mission Objectives display only lists the current objective, and it gives no indication of mission status. Wingmen chatter generally lets you know how you are doing in a vague sense, but a list of all objectives would be more helpful (perhaps color-coded to indicate whether or not the objective has been met).

Not quite a space walk Yet one last issue concerns the lack of mouse support. Although most space sim fans are seasoned joystick users, I’ve found that I can be just as if not even more competitive with a mouse (a habit I’ve picked up from playing hours of Freespace), to which it’s kind of annoying that the game neglects to include this common feature. If you’re a longtime fan of the genre, however – maybe you even have a copy of WC – then the game is worth checking out. The good parts are worth the price of admission, and if you have played a lot of space sims in the past then you’re probably going to appreciate them. 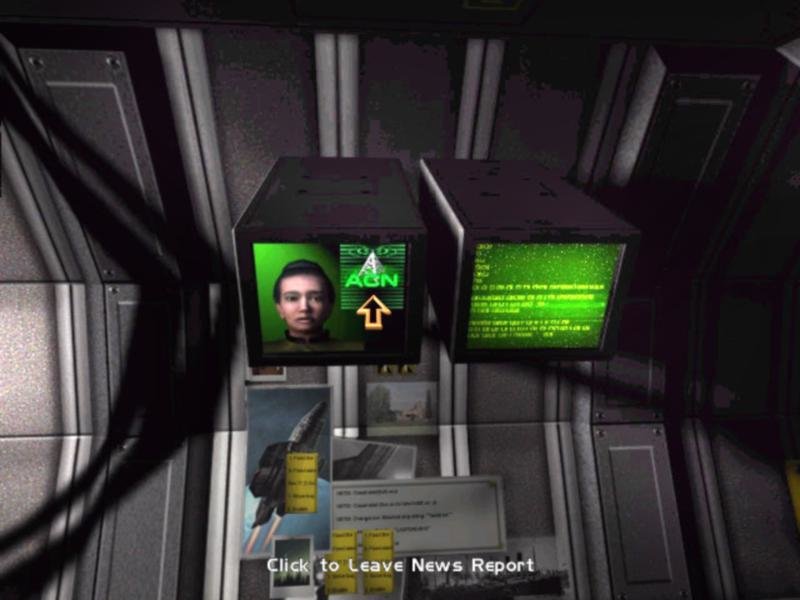