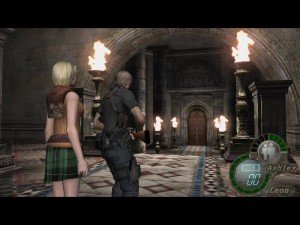 It’s been a long nine years since we’ve last played as Leon Kennedy of Resident Evil 2, with the intervening time shaping the survival horror genre quite a lot from its late 90s format. Gone are the brain-dead dopey zombies staggering towards you, static screens and pixaleted graphics that characterized the first PlayStation games. The fourth Resident Evil is all about reinvigorating the franchise, to which it succeeds in some areas and fails in others.

We’ve got the standard-fare excuse of a story to push us through – Leon travels to the remote Spanish countryside in search of Ashley, the President’s daughter, who was kidnapped by some deranged locals. It doesn’t take much investigating to find that mobs of zombies get traded in with mobs of pitchfork-wielding peasantry out for blood. You find that a parasite has affected the better judgement of the locals, essentially turning them suicidally violent against normal humans. Later on you’ll face off with monks in a hugely extravagant castle and with mutants down ominous sewers courtesy of a very detailed 3D engine.

There’s hints of survival horror in there, but as a whole Resident Evil 4 is a third-person shooter with plenty of action and few tense moments. Some of that tension arises as you get surrounded and have to fend off mobs of angry Spaniards, slowly lurching forward in a very zombified state as you frantically pop rounds into the crowd. Hearing the telltale approaching buzz of a chainsaw is when things really get creepy, as some enemies have the ability to inflict horrific insta-death the moment they close in for an attack. Overall there’s a great sense of variety all-around, and you never spend more than a few game hours in the same area dueling it out with the same monsters.

The location of the camera stays behind and above your character’s right shoulder, zooming in when aiming down the sights of a weapon. Although you’re able to move the camera in a specific direction for a brief moment, usually, you see what Leon sees in a hyper-constricted field of view. While the game enjoys a gorgeous transition from pre-rendered static screens to full 3D, the irony of it all is that you sometimes get to see a lot less of the environment as a result. The camera in RE4 is extremely narrow, formatted for 16:9 widescreen, while the controls feel terribly improper with poor mouse support and a clunky key setup. All but unplayable with the keyboard, you’re frequently stumped by QTEs (Quick Time Events) with button highlights displayed from the game’s console days. 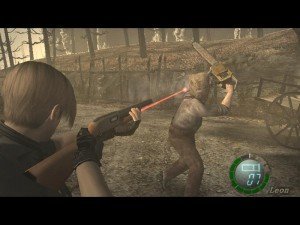 It’s a tad shameful, as the game – when played on either the GameCube or PS2 – is generally great fun. The environments are wonderfully gloomy and the combat enjoyable, with plenty of weapon customization made possible via a new trading system. In essence, you frequently stumble upon shady merchants that sell you all manner of new weapons, explosives and upgrades for the right price, and respectively buy off any precious treasure that you might have found scattered throughout the Spanish countryside. There’s a proper inventory panel that lets you organize weapons, ammo and health items in greater detail.

Fortunately one can properly replay the game on the PC as part of Capcom’s more recent Resident Evil 4 Ultimate HD Edition, which fixes some of the many issues that plagued the 2007 PC version reviewed herein. It took their merry time to create a proper port, but at least it’s here.