Salvation is hard to achieve in Tim Burton’s Vegas.

It’s the late 90s and we’re steadily approaching the new millennium, an upcoming event that’s getting a lot of people riled up. And with good reason, one might add, since numbers, even arbitrary ones set to keep track of time, have a bad habit of scaring us senseless. It’s just that sort of pre-millennial trepidation that Tribal Dreams has set to capitalize on, delivering what could be one of the weirdest point and click adventures on record.

Of Light and Darkness, an adventure game with an ultra-surreal take on sin and redemption, challenges the player to rescue an ex-stripper (dancer?) named Angel Gemini (Lolita Davidovich) from The Dark Lord of the Seventh Millenium, Gar Hob (voiced by esteemed thespian James Woods). The stakes are high – should you fail, the world will be plunged into a thousand years of darkness, doom and gloom will envelope the Earth, crops will wither and die, frogs will rain from the sky and all that jazz.

Hate The Sin, Not The Sinner The Village of the Damn looks like a lively place, and it’s where you go about saving sinners.

You almost wouldn’t mind all that darkness if the glitzy Village of the Damned would still be around, a sort of lost souls collection center resembling something Tim Burton might have dreamt up after a busy night in Vegas. It’s really gorgeous, but we’ll arrive for a closer look in due time. Before that, a cosmic tribunal has chosen you, the literally-named Chosen One, to rescue Angel and save the universe. This is accomplished by redeeming sinners from history, including Caligula, Marie Antoinette, Ivan the Terrible, John Wayne Gacy, and twenty-eight more, all of them spread across the aforementioned Village of the Damned. The way this is done is at least interesting and initially bewildering, made all the more harder by the game’s ticking end-clock.

You collect items like pyramidal trans-portals and multi-hued orbs which will help you on your quest to redeem seven randomly-selected apparitions per level. Conquer three different levels and you’ll enter an end-game with the Dark Lord himself. Each apparition is associated with a sin, an artifact, and a color of light. To redeem any given apparition, you must first identify them and their sin, then locate their artifact and bring it to the appropriate sin room (the sins are of the “seven deadly” variety: avarice, sloth, lust, gluttony, envy, anger, and pride). Once inside the sin room you must combine your colored orbs to produce a flash of light of the correct shade, which will redeem the apparition and bring you one step closer to saving the world from apocalypse. There’s a tutorial roughly explaining all of this, but a brush with the manual is unavoidable.

Time is ticking, as marked by a great Clock of Judgement in the center of town, and time isn’t your only enemy here – the apparitions themselves will hinder you if they can, blocking your way and demanding the return of their artifact. It can all be a bit overwhelming initially, but there’s really only one skill to be learned – redeeming apparitions – and once you’ve got it down, Of Light and Darkness veers towards repetitive simplicity. It takes a near-lifetime to learn, but only a few minutes to master. 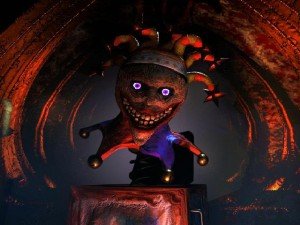 The game tries, at various times, for humor (there’s even a skit on The Amazing Randy trying to explain away the Apocalypse), nail-biting tension, artsy social commentary (pollution of the environment is an on-going theme), and high drama, but the only thing at which it fully succeeds is looking surreal. With gameplay mostly a matter of running to-and-fro and bringing things from one place to another, the energy level doesn’t maintain much momentum for long. There’s only one level, which, while impressively large, does runs out of steam after a short time.

Similarly, there aren’t many different elements in the game (the orbs, used as weapons, tools, and ingredients in puzzles, are the major one) and a bit more variety would have been appreciated. Of Light and Darkness never falls on its face (it’s occasionally spooky, sometimes mildly thought-provoking, and always visually stunning), but neither does it come close to setting a new standard for adventure gaming; a shame, since the subject matter is ambitious, if pretentious, and could have been the starting point for a more unique venture.