Having received just about every award there is, Papyrus’s NASCAR Racing set the standard for racing simulations. With tracks actually modelling the real thing, cars you could customize and realistic car physics, the game had just about everything a racing fan could want. Sierra, knowing that Papyrus was onto something, acquired the developer and together they have created this sequel. Bringing back every important feature of the original game and adding some new ones, NASCAR Racing 2 is a complete sequel and a great racing sim.

All the 1996 drivers and their authentic cars are here, including Dale Earnhardt, Jeff Gordon, Terry LaBonte and even ESPN SportCenter favorite Dick Trickle. So if you’ve ever dreamed of going toe to toe with Dale Earnhardt’s black Goodwrench Chevy, here you now have your chance. Each NASCAR driver and car has statistics, such as aggressiveness and car traction. Every stat has a range of values that allows for some inconsistency in the AI’s performance.

If the range is small, say 500 to 520, the driver will perform within that range and be fairly consistent. If the range is large, like 200 to 900, the driver might drive great one day (maybe in the 800 range) but have a lousy performance the next week (a dreaded 250). All the statistics are adjustable, so if you are sick of getting smoked by Terry LaBonte at Talladega, you can adjust his stats and rip him a new one. When you aren’t racing against them, you can check out the drivers’ biographies and see how they performed during the 1996 season.

Some more goodies: all the drivers’ trademark cars are included, branded with their usual advertisements, and almost all the 1996 season’s tracks are here, too (with the notable exception of Daytona). A few tracks have gone through cosmetic changes since the original NASCAR game, so all have been updated for the 1996 version. NASCAR Racing 2 includes 16 tracks and a total of 28 races during the season (some tracks are raced more than once, with different lap totals). There are even some races, like the Coca Cola 500, in which you’ll have to prove yourself in some night racing. The addition of the actual drivers, their colorful cars and their racing styles is a big plus and gives the experience a more personal feel.

The best feature of NASCAR Racing 2 is the sheer number of game options at your disposal. You can play the game with as much detail as you want. Perhaps you just want an arcade-type racing game in which you don’t have to worry about things like gear ratios, spoiler angles and qualifying laps. No problem; NASCAR Racing 2 offers an arcade mode in which the cars are virtually indestructable, have better braking ability and have better tire traction. Plus, the opponent cars all race to your level. If you are embaressingly behind in the race, they will slow down and let you catch up to the pack. Plus, NASCAR Racing 2 offers two new views that will remind players of arcade racing games such as Sega’s Daytona USA. If the arcade mode isn’t your cup of tea, you can play the simulation mode. Whether you decide to participate in a single race or the 28-race championship season, it is up to you to choose your car’s specific characteristics, including tire pressure, spoiler angle and shocks. In sim mode, the car physics are more realistic, and your car can take realistic damage. Personally, I was never one to get into gear ratios and weight distribution, but the excellent game manual details each in such a way that even a novice can begin to understand the concepts.

As in the original NASCAR Racing, gameplay options are the backbone of NASCAR Racing 2. You can adjust just about everything in this game. If you think 400 laps is too long and boring, you can make each race any percentage of its normal length. Maybe the drivers are performing too well on the tracks; you can easily adjust how well they drive overall. Tired of racing against 40 competitors? You can choose the number of racers and which specific racers you compete with. The number of options is the best thing about NASCAR Racing 2, as it allows everyone to enjoy the game. Whether you like a detailed racing simulation or an arcade racing game, there are enough options to satisfy both needs.

With additions like actual NASCAR drivers and cars, the crew chief and spotter and arcade mode for those who don’t want to worry about all the technical stuff, NASCAR Racing 2 is easily one of the best DOS-based racers ever made. It keeps the stellar gameplay of the original and adds new features to make the experience not only more exciting, but also more realistic. 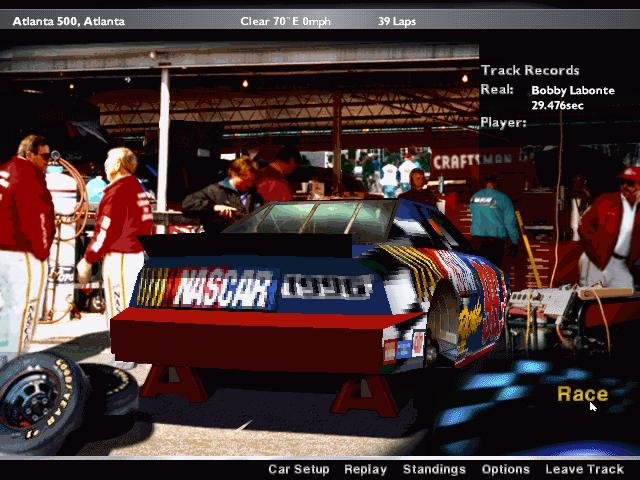