Menzoberranzan, an Advanced Dungeons & Dragon game, isn’t a title that easily rolls off the tongue. In its time, however, it was one of the better AD&D titles, featuring inspired graphics, an involved storyline, and an intuitive interface. At the same time, it also points up the problems and limitations involved in producing any game in an AD&D world.

Menzoberranzan is based on R.A. Salvatore’s best-selling “Forgotten Realms” novel The Legacy, which explores the mysterious culture of the Drow. A race of nocturnal, subterranean, dark-skinned elves, the Drow are known for their sadism and their worship of dark creatures. Unwary surface dwellers in the Forgotten Realms are often snatched by the Drow, and nobody has been able to stop them. One night, as your group of companions gather, a Drow raiding party strikes. They raze your town and kidnap innocents off to their underground lair. The villagers immediately turn on a kindly Drow named Drizzt, blaming him for the raid. Though uninvolved, Drizzt is determined to set right the evil his people have perpetrated, and he agrees to lead your party to the mysterious Drow town of Menzoberranzan to rescue the kidnapped villagers. As you journey deep into dark and evil lands, you slowly learn more about the complex culture of the Drow, solve puzzles, and of course, fight.

To be fair, Menzoberranzan is more combat than puzzles, though it does have more a more deep emphasis on politics later in the game. As your party gets deeper into the Underdark and eventually to Menzoberranzan itself, they become involved in the politics of the Drow, who are controlled by a series of noble Houses, all vying for more political power. As you’re forced to help some Houses defeat others, you begin to upset the balance of power among the Drow, possibly enabling one House to unleash an ultimate destruction on the world.

The Menzoberranzan engine is fairly advanced for its time. The entire party can strike at an enemy with a single mouse click, and spell-casting is a relatively easy affair. The simple, real-time engine brings most fights to a speedy resolution, which means that long stretches of combat don’t interrupt the flow of the game much. Inventory and character accoutrements are handled in a screen that lays out all information cleanly and efficiently. An entire bevy of new monsters haunt the darkened lands you must traverse, and new weapons, spells, and prayers are available to help defeat them. The first-person perspective and lush graphics give you a front-row view of some hair raising critters as they either kill you, or suffer a gruesome death. Add in an extensive soundtrack, elaborate cut scenes, countless sound effects, and spoken dialogue, and you have one of the most complex and fulfilling role-playing games in this series. Though not the best computer game in the AD&D repertoire, it is nonetheless a worthy example of its kind. 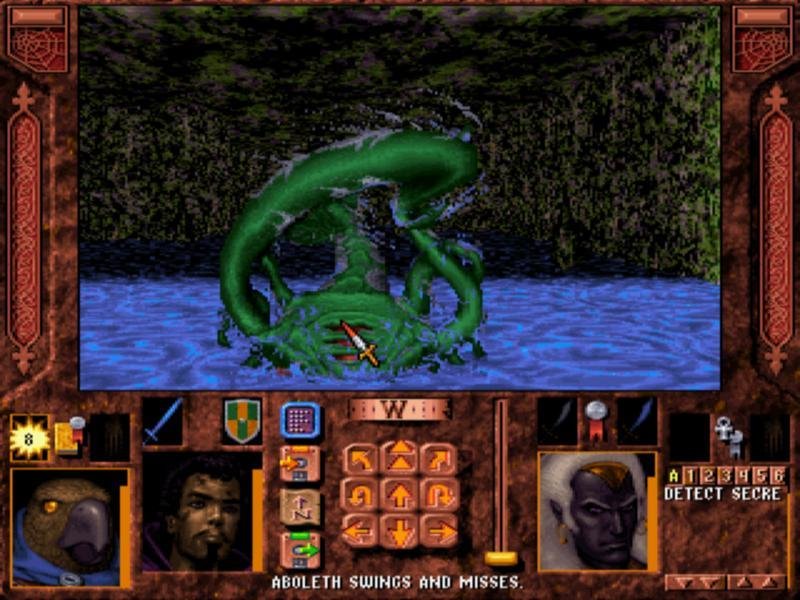