Hands down the best MechWarrior so far.

Few series can match the raw emotive fun of the MechWarrior line. There’s a singular joy derived from driving 100-ton bipedal monsters bristling with all sorts of missiles and guns. The story behind MechWarrior 4 is the typical fodder for such a game – your royal family has been brutally murdered, and its rule over your home planet usurped by a tyrannical clan. What better excuse do you need to lead a small rebel force of MechWarriors on a rampage of vengeance?

At its core, this is a MechWarrior game, and a great one at that. You can destroy just about everything you see, and much of it simply by driving your Mech over or through it. Trees splinter into a million toothpicks under your Mech’s metal feet. Tanks, trucks, cars, tents, huts, and small buildings are reduced to rubble in your wake, in that unique ground-shaking, dust-kicking, footprint-leaving impact a  BattleMech has on a neighborhood.

And you’ll wreak havoc in some extremely beautiful and realistic game environments throughout the course of the campaign’s 30-plus missions, spread across 15 diverse game maps (alpine, desert, swamp, urban, lunar, etc). Through these locations you’ll get to take 21 of them out for the ultimate test drive — and six are brand-new to the series. The heavy assault Mad Cat Mark II is the pick of the newcomers; it’s a bigger and badder version of one of the most popular Mechs ever. And the medium Uziel, with its dual PPCs, is an all-around warrior’s dream. 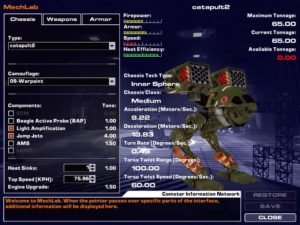 Regardless of size, all the Mechs are a blast to drive and destroy with, thanks to a slick heads-up display that gives you all the necessary information – damage, ammo, weapon status, torso orientation – at a glance, and a slick control scheme requiring minimal use of the keyboard. (You will need a decent joystick with a throttle control and/or rudder control option, however). And, a brief-yet-comprehensive training tutorial is available to help prevent new Mech recruits from crashing and burning on their first time out.

New weapons include the Long Tom Cannon, which is basically a long-range artillery gun you can strap to your Mech, and the Bombast Laser, which takes some skill to use but can be more lethal than other energy weapons. As always, you can choose your Mech, and outfit it prior to embarking on a mission in the Mechlab, which with its simple drag and drop configuration is as simple as ever to use.

If you’re new to the series, this is a good start. MechWarrior 4 takes and improves the winning combination of action and tactics from past games, and bundles it an a fun, explosive package.