It’s actually surprising how little effort was put into trying to duplicate the successful console “survival horror” genre with this game. It draws inspiration from Resident Evil. This includes giving you a haunted locale filled with zombies and monsters (in this case, at a base on Mars), a third-person perspective with fixed camera angles, and a conspiracy that gets gradually unraveled via notes and voice logs left by the zombified crew. Since the game nails many design ideals and even manages a few new twists, its bad controls and poor presentation become all the more glaring.

One of the interesting new twists is controlling three characters. These astronauts are coming to investigate the destruction of the Martian base and its last cryptic communication, “Stay alone, stay alive.” As a precaution against the disease that seems to have wiped out the base crew, you have to make sure that none of your three characters are in contact with each other – a neat quarantine gimmick that adds to the chill factor.

This makes for some novel gameplay, as your characters have to work together and send items back and forth to solve certain puzzles without ever being in the same location. Unfortunately, this cool dynamic, crying out for original puzzle creativity, devolves into “find key A, send through vacuum tube to other team member to open door B.”

The base crew, of course, isn’t quite dead. They’ve been re-animated as flesh-eating zombies. Just as the tempo is rising, though, the game hamstrings itself with horrendous control. The keyboard combat controls are awkward enough to be mostly useless, and for a game that takes a console title as inspiration, having no options for gamepad or joystick control is a major mistake. In addition, your inability to permanently stop or even temporarily slow down the zombies frequently leads to situations where you’re repeatedly trying to open a door while fending off a zombie, only to have the door close by the time you’ve taken care of the zombie. This infuriating quirk turns their attacks – potential moments of pure terror – into mere annoyances as they happen again and again. I sometimes had to re-load a scene six or eight times before figuring out the sequence of steps that would get me through a room while dodging the creatures. Coupled with the completely frustrating console-style save-game scheme (you can’t save anywhere, meaning you have to repeat some sections several times), much of the game’s innovation is overshadowed by its poor design.

It’s too bad that for a “survival horror” game, Martian Gothic’s scares are so few and far between. The zombies are so ubiquitous that they’re more of a hassle than a threat. Nothing in the game even comes close to the “zombie looking over the shoulder” scene that made Resident Evil or the Alone in the Dark games classics. 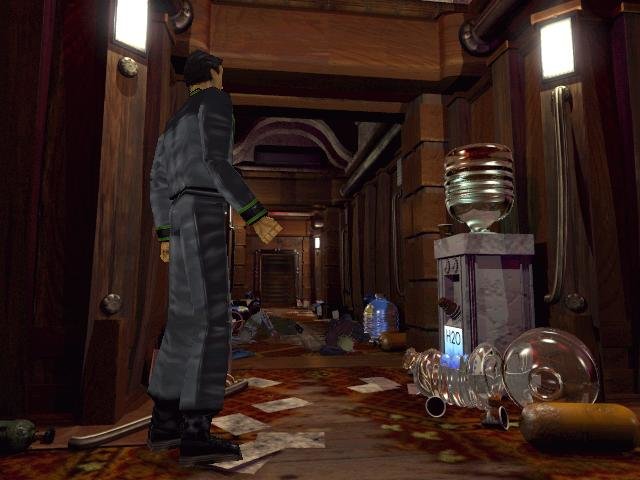