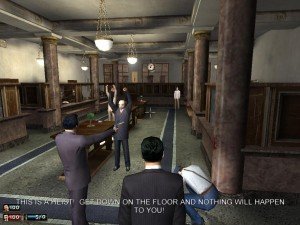 You can’t keep a good wiseguy down.

Organized crime has inspired some of the best films and television shows ever – Godfather, GoodFellas, and The Sopranos, to name a few. And though a handful of games have tried, few have successfully captured the feel of gangster movies. But with Mafia: City of Lost Heaven, Czech developer Illusion Softworks has done something quite unique. Although the game as a whole is far from perfect, the sheer atmosphere and attention to detail is so great that you’re liable to go through it just to soak in those swinging 30s.

Those who are familiar with Illusion’s Hidden and Dangerous 2 will recognize how thorough these folks are with recreating believable environments, and of course the same goes here. Everything from the architecture, car design and music to the fabric wallpaper that were trendy in the 30s were painstakingly recreated in New Heaven, a fictitious city that draws a lot from New York and San Francisco of that era.

The catchy vintage soundtrack reeks of nostalgia, and though some of the voice-acting can be charitably classified as “acceptable,” the overall plot is engaging enough to keep things interesting. Cut-scenes between missions are movie-like in their presentation, the camera is almost always in a good position, and, for me, the game was refreshingly crash-free throughout. The one fly in the soup is that even on the burliest machines, the graphics at the far horizon tend to “pop in” too noticeably. It’s not disastrous, and with other details so stunning – especially the loving attention to the city and its cars – it can be forgiven entirely.

You;re excused if you initially mistake Mafia for a GTA knock-off. While the city is huge and free of noticeable barriers, you go about navigating your alter ego Tommy Angela – a lowly cab driver turned mafioso – in a very mission-by-mission format. Illusion thought that pushing the sandbox feel would take too much time, and would pull you too far away from the linear storyline. In any case, Tommy plays driver for the Italian mob and the assignments he’ll be put through are intense, ranging from car chases, assasinations, burglary to simple ‘shoot every bad guy’ situations.

The cars – which alas are unlicensed copies – are naturally slow and bulky, delivering a very different sort of driving experience. Driving is a big part of Mafia, and once in the mob, you will have a greater selection of cars to drive. The game even boasts an encyclopedia that gives overviews of sixty vintage vehicles in the game, ranging from a Model T replica to a dangerous racing car. The driving physics are above average, including damage modeling, so watch out for that burdensome flat tire.

An Offer You Can’t Refuse 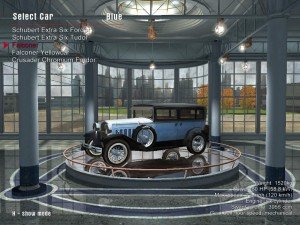 You can examine Mafia’s sixty cars from this gorgeous showroom encyclopedia.

Even when most of Mafia is just cruising around, it still rocks. There’s something enchanting about the vehicles and architecture of that era that makes one enjoy cruising through Mafia, and cruise carefully you must when on the non-combat missions since the law is strictly enforced. Traffic violations like running red lights or speeding will get those sirens wailing if there’s a cop car nearby, and more serious offenses (murder, theft) will get you inside a paddy wagon. There’s an increase of force from the police but here it’s more logical than in GTA, so speeding is merely penalized via tickets (translating to lost time) but going on a murderous rampage is met by lethal force.

When done with the story missions, Mafia also has a separate Free Ride mode offering a chance to explore the city at your own pace. This mode lets you adjust the amount of traffic, the number of people walking the streets, and how long the arm of the law will be. Completing the campaign opens up more options, including Free Ride Extreme. Here you completely rid yourself of the pesky police force, and open the opportunity to gain further vehicles by completing odd-job tasks. While it’s nowhere near as fun as the campaign (or GTA III, for that matter), this loosening of the belt is a good bonus, and just adds another checkmark to the positive side of the ledger. 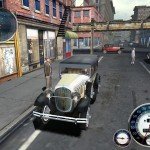 You initially start playing as a taxi driver. 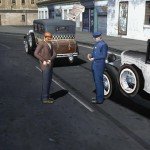 When caught speeding, you have to pull over and pay the fine. 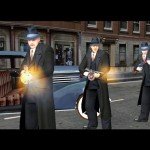 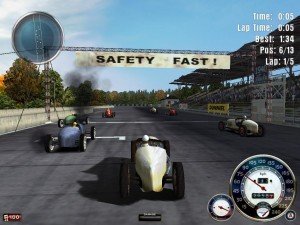 The racing bit in Mafia is very demanding.

Most of those negative checkmarks come from Mafia’s unreasonable difficulty and often frustrating combat. It’s just not a fun shooter, pure and simple, and the limitations in ammo and hitpoints mean you’ll be replaying the same segments of the game far too many times. And a racing mission halfway through the game was so annoyingly difficult that I had to skip it entirely. Though excessively demanding in its difficulty, Mafia is still one of the most impressively designed games to hit the PC in 2002. Be ready for some tough and annoying combat along the way, but overall I’d say it’s worth playing just to soak in the atmosphere.