F-22 Lightning 2 may not be exactly what hard core flight sim fans were looking for, but in all fairness, it isn’t as arcade-ish as some say, either. Beginners and very casual flight sim players will have their hands full. In many ways these tips will also work on the sequel (F-22 Lightning 3). With a little perseverance and a couple of tips, you’ll dominate the virtual skies in both games. Make sure to read the manual and learn the HUD interface. Also get a cheap joystick and get a basic feel of the plane. Once you have a decent understanding of how to fly in Lighting 2, it’s time to talk practical strategies.

In Lightning 2 your biggest threat is missiles launched from enemy planes or stationary ground launchers. While technically some are aircraft-based and some are surface-based, they’re both missiles and in Lightning 2, for all intents and purposes, it doesn’t seem to matter much which they are. Oh, you can decrease your chances of SAMs being fired at you by flying NOE (Nap-of-the-earth, or very low altitude flight) or keeping your radar turned off by pressing “R”, but once they’re launched at you, you need to evade them, a process called “spoofing”. 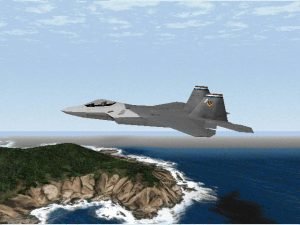 While countermeasures on the F-22 are automatically dispensed, since you have 100 loads of each, manually dispense these liberally by pressing “C” once you get a missile launch indication. Launching CMs manually is much more reliable once you learn the process. Quickly switch to the Defense Display by pressing “KeyPad4”. Note which way the incoming white missile trail is located in relation to you. If you just launched a missile yourself, you can differentiate incoming from outgoing missiles by which white line is connected to your blue colored aircraft in the center of the display.

The white line disappears as the missile moves along its flight path, so the missile connected to your aircraft is the one wanting to scratch your radar-refractive paint job. Once you’ve identified the threat, you need to maneuver the aircraft so the missile is abeam of yours. This means putting the missile directly off either your right or left wing tip. Hard dives with sharp banks using either rudder is also effective. Drop countermeasures all throughout the process. It’s difficult to fly looking at the Defense Display even with the little attitude indicator in the upper right hand corner “KP8”. This can be hard to get used to, but the only alternative is to switch back and forth between the Defense Display and one of the other cockpit or HUD views, or to try to use the small attack display overlay “KP8” while in cockpit view. 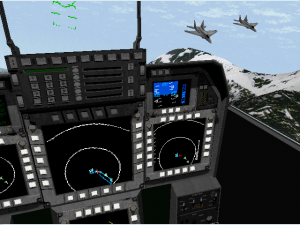 With the abundance of power the F-22 has at its command, it is very easy to get caught up in the moment and forget that you need to slow down to corner better. The first thing to do is drop your brakes by pressing “B”, then bank and pull hard. While pulling out of afterburner (AB) will facilitate slowing, it isn’t necessary. Skip that step if you have problems remembering to kick the burner back in when you need it. Again, that probably isn’t realistic or sound in advanced sims, but the F-22 in Lightning 2 is pretty forgiving. Take advantage of it if you need to.

Flaps can help your turn rate if you’re stuck near stall speeds, but you probably should have flown better and never gotten yourself in that situation in the first place. It’s far better to stay in full AB with the brakes on than to get too slow and require flaps.

BVR (Beyond Visual Range) fighting is the reality of modern fighter warfare. This isn’t to say that dogfighting doesn’t happen (or is preferable by some), but getting a BVR kill is the safest way to engage the enemy because it limits your exposure. The AIM-120C AMRAAM missile has a longer range than any of the enemy missiles in Lightning 2. This means you can launch without being launched upon. Sometimes an AMRAAM e might not reach its intended target for whatever reason, and you could find yourself in a proper dogfight.

The most common reason why pilots end up in a slow situation is usually because they get too preoccupied with tracking their enemies or objectives. If you’re turnin’ and burnin’ with the enemy, just as when you’re spoofing missiles, slowing down as we’ve discussed is critical. Other tips to remember are that missiles require a couple of seconds to launch. If you’re dogfighting and the enemy is very close to you, by the time you launch a missile, the bandit will most likely be gone.

This means you have to kill him with your gun. One tip about the enemy AI: the enemy will jink when you lock a missile on him. If a bandit is moving out of guns range, lock a missile on him. The enemy AI is fairly predictable, and will usually pull up. You’ll be tempted to launch on him, but refrain and quickly switch back to guns instead, and fill him full of lead. Gun kills are by far the hardest part of Lightning 2, but they’re also probably the most satisfying. Regardless of how much fun dogfighting is, ideally, you should never have let a bandit in that close.

Unless you have to guard a friendly, it is a good idea to always play aggresively. Shoot first to put the enemy on the defensive. This will keep them occupied; you can then take care of the others. Consider saving one or two 120s for later on in the mission. Sometimes this isn’t possible, but you can never tell when some of the bandit’s buddies will show up to spoil your fun. 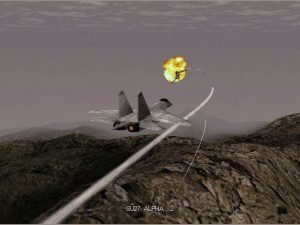 When faced with multiple targets, you need to prioritize them. Threats to the assets you’re protecting are usually first, with your immediate threats next. Note who you fire missiles at. This will avoid firing subsequent missiles at the same target before the first has a chance to finish its job. If you have trouble keeping track of who you’re escorting, use the Boresight Targeting switch < ‘ > to lock on friendly targets. Your HUD will ID the target in question. However, only do this in gun mode, or friendlies will fire on you. Send your wingman to attack additional  bandits.

While nothing is set in stone, some basic strategies are mission dependent. If your mission is to protect a ground target, take the fight to the enemy. Engage them as far away from their target as possible. This leaves you a safety cushion in case one gets by you. This usually means bypassing Nav points. Using the briefing map can help you figure out where you need to be to place yourself between the enemy and your assets. However, with some escort missions, you need to stick by your ward. On strike missions, whether you go after the target or take care of defenders first depends how tough they are. In Lightning 2, I’ve had pretty good success clearing out the defenders first, but not always.