East Front is a platoon-level wargame covering battles between Germany and the Soviet Union in WWII. It replaces the earlier games’ hand-painted maps with tile-based boards, a random map generator and scenario editor. Units are modeled from miniatures, with lovingly detailed tanks and guns and infantry. While the video clips that graced the Battleground series have gone AWOL, East Front retains the extensive library of digitized sound effects that is also a TalonSoft hallmark. TalonSoft also includes a campaign game, random battles, and a full editor.

While the box boasts of great historical detail, and celebrates an “all-star” cast of wargaming luminaries who contributed scenarios, it also features lines like “Teeth Clenching Armored Warfare!” and “Thundering Armor at your fingertips in stunning High Color!,” and promises “Fast-paced, explosive action.” Hardly calculated to appeal to the wargaming hardcore, to whom such expressions conjure up images of Command & Conquer rather than Stalingrad or Kursk. Yet the sheer volume of units, unit types, scenarios, and options in the game, as well as its scale and subject matter, is anything but suitable to the casual gamer.

At first blush, though, East Front is solid. The views are great, the variety of units, battles, and environments fascinating, and the number of options intriguing. Unfortunately, the bloom fades, and what begins as a hot date soon degenerates into tedium. Good pre-built scenarios are marred by poor AI, while the campaign game replaces the thrill of WWII combat with the boredom of fifty-two pickup as players attempt to gather their scattered forces, victims of the game’s woeful deployment routines. What is supposed to be an epic clash between two bitterly opposed military, political, and social systems instead becomes a lackluster melee between hordes of relatively undifferentiated and all-too-similar units.

Problems with the game are legion. For starters, the manual is wretched. Anyone unfamiliar with wargames will certainly get little help here, and might very well decide to return to C&C. Then again, the utter lack of information and detail about the actual game system, or even any real data covering terrain, combat, and mechanics, is likely to infuriate the experienced gamer, who is hoping to gain some sense of how things work in East Front. Some information is simply missing, such as a visual terrain chart that shows examples of each hex and hexside type. Other data, such as unit organization information, is present, but hard to use effectively. Commonly accessed data like range and combat values are not displayed clearly, but are buried in poorly organized and presented charts and tables. Finally, one last annoyance is that the game has a habit of changing your Windows appearance (colors, fonts, etc) but will fail to switch them back upon exiting, so you’ll have to manually adjust it yourself.

Whether TalonSoft is aiming East Front at grognards or at novices is a mystery. The game is too rough for newbies and too simplistic for the old guard. It does have compelling subject matter, great maps, multiplayer support, and a good editor, so it’s not without merit, but the core game is not the most encouraging basis on which to draw in wargamers of any stripes. 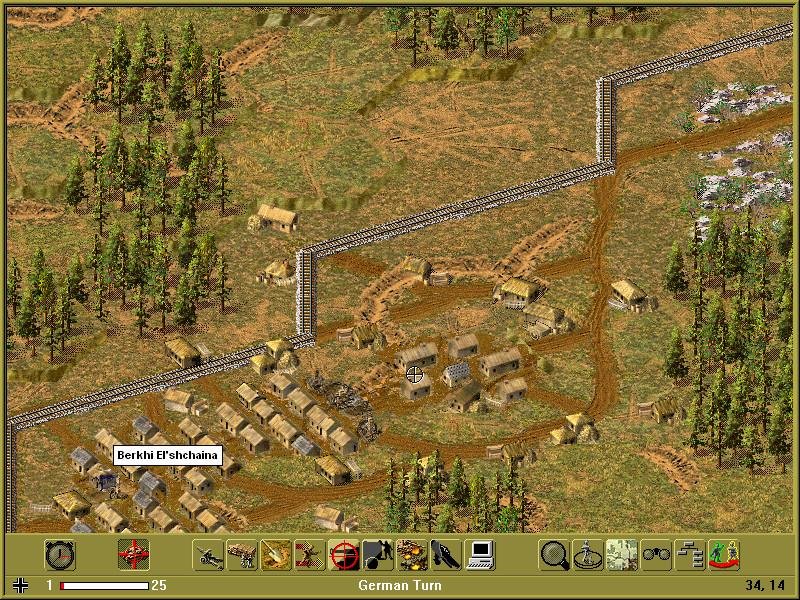