Playing Dungeon Odyssey is less of a retro throwback than it is retro stampede, having more in common with those old school role-playing adventures from the late 1980s than anything even remotely modern. For fans of roguelike or early Ultima games this is a dream come true. It uses an isometric grid-based environment to render the world in very colorful and cartoony tones. Combat is but a matter of clicking on monsters until they go down, grabbing their loot, ransacking chests and other containers for items and doing regular trips to town to restock and trade the crap you don’t need for better gear. In this sense there’s a modern ARPG vibe to it, which isn’t a bad thing considering it makes the game more playable and enjoyable.

But don’t expect any easing up when first playing Dungeon Odyssey. It absolutely sucks at giving you any indication on what you’re supposed to do. You’re not told, for instance, that your first stop should be a farming town located NW of your location. Or that there’s an orc-infested city to your SE that you absolutely must visit, but that you should grab a couple of important quest items before that.

Finally locating Nurtred, the farming town mentioned earlier, you find that the entire place is a collection of three buildings in the middle of a huge green field. Its inhabitants (three in number) aren’t much help giving any backstory or purpose to your journey. After finally located the orc-infested town that you’ve heard about earlier, you find that there’s nobody inside. When you do encounter monsters and first engage in combat, you realize another pressing problem – you shouldn’t have picked the lowest difficulty level.

Anything other than the ‘Expert’ difficulty makes the game completely boring and pointless. On the highest difficulty you at least get monsters to kill, stuff to collect, experience to amass and level ups to work towards. There’s a comprehensive leveling system that’s engaging enough to make you want to build up your character’s stats, and a spacious inventory for hoarding lots of items before taking a trip back to town. The skill tree is intuitive and different for each of the seven characters that you can start with.

One of the better things about this game is its interface. Almost every bit of the screen is intuitively spread out, with the notable exception of an automap for navigating those confusing dungeons. You need to manually click on the map every so often and this gets annoying. A more serious flaw is how you can accidentally sell quest items if you’re not careful, with the game deleting said items the moment you leave town.

Dungeon Odyssey is one of those games that will not be enjoyed by those weaned on RPGs that have elaborate graphics, gameplay, and rich, enthralling plots. If youâ€™re an old-school junkie however, youâ€™ll probably find plenty of retro action to enjoy here. 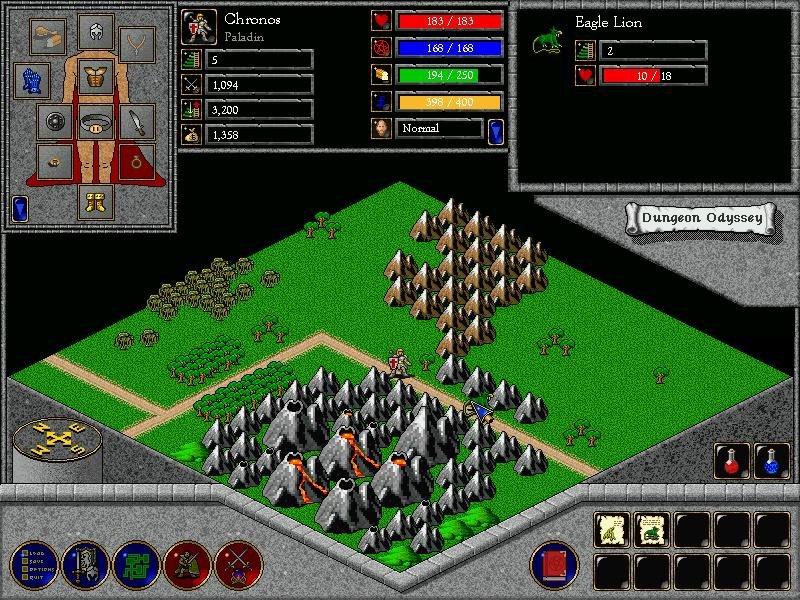