Jump back to the 1990s and some of the more popular games were graphic adventures. LucasArts popularized the genre with Maniac Mansion, Zak McKracken, the wildly popular Monkey Island series, and of course Maniac Mansion 2 (Day of the Tentacle). In the original Maniac Mansion, the hero, Dave, was trying to save his girlfriend from the clutches from Dr. Fred, who is currently being mind controlled by an evil purple meteor. You chose a combination of Dave, and 2 of 5 other characters to help him, one of which was the nerdy Bernard.

One day, Bernard gets a message from his pal Green Tentacle, one of the characters from Maniac Mansion. Apparently, your old adversary, Purple Tentacle (the far more sinister tentacle from Maniac Mansion) has taken a swig from Dr. Fred’s Sludge-O-Matic and sprouted arms, and now he’s plotting to take over the world. In an effort to stop him, Dr. Fred sends three friends, Bernard, Hoagie and Laverne back in time to yesterday, in order for them to turn off the Sludge-o-matic. Gameplay is familiar to anyone who’d played a LucasArts adventure before. You can walk to anything by clicking on the screen, and if you want to do anything else, you can put together commands using the interaction words at the bottom. This was an elegant solution to the problem you had with Sierra games in which you could only use a text parser for interaction. The puzzles got damned creative throughout this game and most of them were wacky as hell. One section requires you steal George Washington’s gold quill pen that’s he’s using to draft the Constitution, because Hoagie needs to make a super battery.

The majority of the puzzles in the game get solved in some similar manner, and if the madcap hilarity of the puzzles doesn’t strike a chord with you, the humor in the dialogue should be enough to generate a few good laughs. Youâ€™ll absolutely love Bernardâ€™s vocals, which are never annoyingly geeky. Laverneâ€™s voice can be quite grating, but it does fit the ditzy personality she is supposed to have. Your third playable character, Hoagie, is probably the most humorous, as he has the whole “Bill and Ted” thing going on.

But the area where Day of the Tentacle lacks is puzzle design, which could have been better. A huge part of Maniac Mansion is the fact that each character has their own strengths and weaknesses â€” different characters can solve different puzzles different ways, and, depending on who you chose, you can experience a different game each time. That’s not the case with Day of the Tentacle. Still, itâ€™s not a big enough omission to have a severe effect on the game as a whole; you just canâ€™t help but wonder if the use of three characters was even needed. 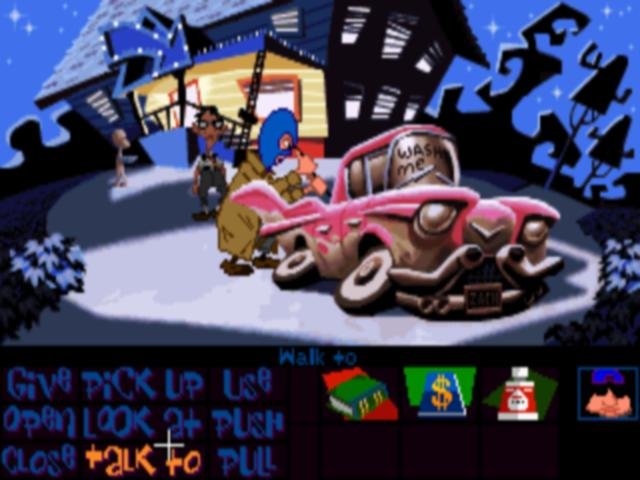