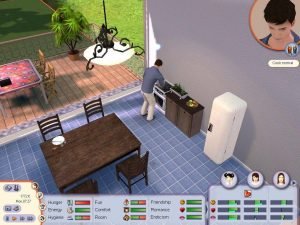 The Sims, but with none of the charm.

As a cheapo knockoff of The Sims, the core gameplay found in Singles 2: Triple Trouble is the story mode, where you get to experience the sitcom lives of 20-something nobodies Josh and Anna. Josh is Anna’s ex-boyfriend who has just moved in the same household with her. Neither of them were aware of that fact however, so the situation is at first tense and a bit awkward. Josh has now decided to win Anna’s (broken) heart back, backed up with the wise counsel of his friend Magnet.

The first mission is to get the two lovers back together. Meanwhile, all the basic actions are introduced: cleaning the house, repairing appliances, decorating the rooms, looking for a job, making money and interacting with other people in the storyline with a Sims-like interface. You can also upgrade your character in several ways, and use those skills to further your relationships and accomplish various goals. Become an excellent cook, for instance, and you can wow your lover with exotic dinners.

The primary objective is winning Anna’s heart back, so occasional hook-ups with other people you may encounter in bars only serve to give you more confidence. The basic idea of the Singles – which is now three people in the same household – requires a bit of work on your end. Thus, you are assigned many different tasks during the game, and most of them serve for improving your skills and guiding you in the right direction. The objectives need to be completed successfully before they are replaced by new tasks, which rewards you with skill points. 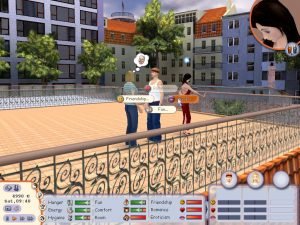 The main problem with Singles is that the gameplay is a trimmed down Sims clone with underwhelming objectives. Although story mode allows you to switch characters, the actual gameplay is rather tiresome. And even though Singles tries to focus more heavily on the romantic side of things, the AI for this is rather weak. You can, for instance, be a complete bastard and argue with a character just for the heck of it. They’ll cry and become upset, but then seconds later you can offer to tell a joke and they instantly lighten up. It all feels robotic, and odd.

The characters should definitely have been offered more choice when it came to expressing their feelings or simply reacting to the outside world, since the focus on realistic relationships is the game’s main gimmick. Other parts do little to lighten things up. With monotonous repetitions of the same actions, even the game’s secondary objectives soon become stale and boring. Outside of perhaps buying new stuff, you won’t find any of the complexities that made The Sims addictive here.