The Close Combat series was introduced real-time, squad-level combat like no other game had done before. The third game, The Russian Front, is possibly the most innovative of the series. Close Combat 3â€™s realistic landscapes prove that a game doesnâ€™t have to be 3D to be beautiful, and that creatively designed campaigns donâ€™t have to stagger in order to provide historically accurate gameplay. The campaign game is huge, and itâ€™s played out on large maps. Thanks to the Russian doctrine of launching massive counterattacks, you may well find yourself fighting like hell repeatedly over an important objective.

Certainly, the campaign in Close Combat 3: The Russian Front flows more smoothly than the brawls depicted in the first two games. And the terrain is much more varied: steppes, forests, and cities. Tactics which might have sustained your efforts in those first two games simply wonâ€™t cut it on the Eastern Front. Be prepared for unpleasant surprises; the artificial intelligence is good, and your men are quite likely to panic the first time you run into a T-34.

The first change youâ€™ll notice is in the maps the game is played on: theyâ€™re two or three times as big as those in the first two games, which makes it impossible for you to have a strong presence everywhere. Whichever side you choose to play, itâ€™s a good policy to keep at least one platoon and one armored unit in reserve so you can plug holes in your lines or exploit breakthroughs.

The seriesâ€™ interface has always been good, so you wonâ€™t find any major changes in this installment. You right-click on a unit to issue orders. These now include “ambush” (hide until the enemy is right on top of you, then cut loose with everything youâ€™ve got) and “defend,” which brings up a directional arc so your defensive firepower is concentrated on the enemyâ€™s most likely route of approach. Another vital change is the new waypoint system. In the first two games, you clicked on an objective, and your troops frequently chose the fastest route of approach, even if it meant moving into the open. Now you can sneak from cover to cover. 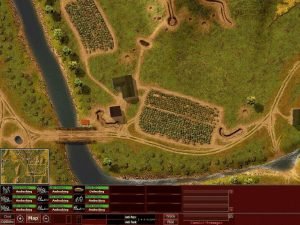 Atomic has borrowed a few new features from other real-time strategy games, but fortunately these donâ€™t get in the way of whatâ€™s important. Take group-numbering, for instance: now you can locate your mortar and heavy MG units much more easily without losing precious time scanning the information bar. And each unit now has a status bar attached to its icons. This not only tells you at a glance how each unit is performing, it makes the units themselves much easier to spot when thereâ€™s snow on the ground. You can also draw a box around several units and direct them toward a common objective.

As before, you have a certain number of points with which to purchase new infantry or updated weaponry. You can also choose which kind of unit to purchase. Elite is always good, but youâ€™ll seldom be able to afford many elite units. The same amount of points will let you purchase twice as many Standard units (whose performance may range from abysmal to heroic) and an even larger number of Recruits. If you take proper care of recruits, eventually their status changes to Veteran, and you can take risks with them that youâ€™d never assign to green replacements. Units that are temporarily burned out (especially those whose commanders have been hit) can be given rest orders. After your force reaches company size or greater, you should also purchase a few sub-commanders. These provide stability and encouragement to the recruits near them, making them less likely to panic or retreat without permission.

So is this the best game of the trilogy? Might be. Lots of gamers complained about Close Combat 2â€™s focus on Operation Market Garden. Atomic listened to playersâ€™ suggestions and used every bit of its hard-won expertise to give them the Eastern Front epic they all seemed to want.