It seems there are two adventure games around – the typical Myst clone where you roam around abandoned landscapes, and the second type where you actually interact with other people. Black Dahlia, an adventure game that mixes real-life actors with CGI backgrounds, places itself in the latter category, and is actually a great representative of its kind. Where many other games of its ilk either bore us to death with lame puzzles or cringe us to death with lame acting, Black Dahlia manages a consistent barrage of digestible gameplay and good story to boot.

Set in the 1940s, you begin the game relegated to an abruptly abandoned office of the COI headquarters, a fitting treat for naively buying off on recruiting promises of adventure and espionage. Investigating complaints of Nazi coercion hardly constitutes the thrill ride you were expecting, but things heat up quickly when the initial investigation uncovers your predecessor’s less than amicable departure. Facts roll in and you begin the search for the feared Torso Killer, a maniacal, bloodthirsty serial murderer loose in Cleveland.

Most of the game mechanics of Black Dahlia follow conventional rules of old style adventure gaming. Players click from node to node, with pertinent items highlighted for closer inspection at each stopping point. The viewpoint can be dragged 360 degrees horizontally. Items and objects in the game can be dragged or pulled in addition to the standard selection and inspection options. As new places to visit become available, a snapshot of that location appears in an easily accessible world map. Thanks to this central navigation scheme, switching between locations occurs instantly, which eliminates a lot of backtracking.

Black Dahliaâ€™s game engine doesnâ€™t provide full freedom of movement: you can only travel down pre-determined pathways, and one of the gameâ€™s few annoyances is that thereâ€™s no way to bypass the sloooow movement animations. Once youâ€™ve stopped moving, youâ€™ll be amazed at the sights that await you: youâ€™re able to look in all directions to examine your surroundings, and whatâ€™s even more impressive is how crisp and clean the graphics are during these interactive sequences. Mastering the manipulation of inventory objects can take a little practice — sometimes you need to “use” an object on someone to give it to them, but other times merely starting a conversation with someone provides you with an opportunity to give them an object. On the whole, though, the interface is both friendly and functional. One surprising achievement is the way dialogue is handled. Thereâ€™s a lot of non-interactive sequences here, but theyâ€™re usually preceded and followed by fully interactive segments — and during these scenes you see the characters move fluidly and naturally. In fact, body language often says as much about the personality of the character youâ€™re interrogating as their words do. Itâ€™s subtle, but this helps draw you into the action. The acting is surprisingly good as well. Though Dennis Hopper and Terri Garr are billed as the stars of Black Dahlia, both play only minor roles. The rest of the cast fare no worse, fortunately.

Given all this, is there anything truly wrong with this game? Not much, though the tension racketed up in the first half of the game does go down the rain on the second half. Why? Simply put, on an over reliance on mechanical puzzles that spring up around that time, all of which were seemingly added there to artificially lengthen gameplay time. Big mistake, since the game is plenty long enough. In either case, if you don’t mind the occasional (and completely artificial) runic symbol puzzle going your way, then you will enjoy Black Dahlia where it really counts – as a competently acted and well written interactive story. 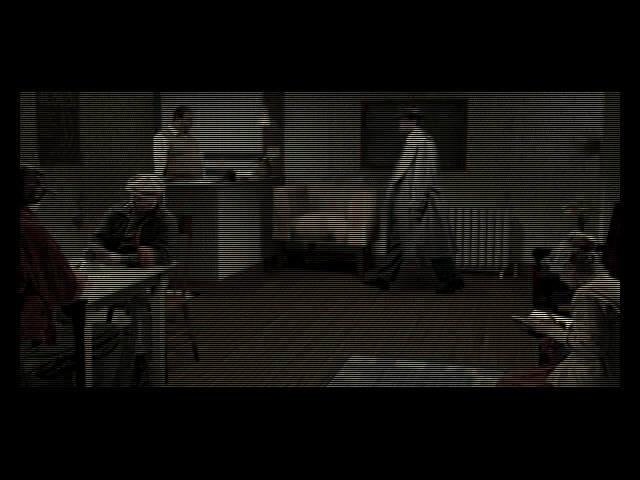