If you have never heard of Bedlam, simply think Crusader: No Remorse and Syndicate (arcade isometric action games with endless explosions). Sometime in the future, horrible monsters called Biomex have taken over human installations, and itâ€™s your job to clear them out. Youâ€™re in command of a three-man R.A.T. (Remote Assault Tank) team, and youâ€™re dropped into each of the gameâ€™s 25 missions where you must fight your way through danger-filled levels, destroy your target objectives, and then find your way to the extraction point.

Controlling your units is easy: use the left mouse button to run to a spot on the screen and the right button to shoot, similar to Syndicate. You choose different weapons with the number keys (and in a nice touch, you can select more than one weapon to fire off at a time), and use the first three function keys to switch between your R.A.T. units.

Like Crusader: No Remorse, almost everything on the screen will blow up, and the explosions and destruction are quite satisfying. Your R.A.T is about the size of a small truck, and the map is refreshingly large, so thereâ€™s plenty of places to wander about and explore. To get extracted, you must find a reddish beacon somewhere on the base. To get to a beacon, as well as to your various destinations, you must activate a large number of entrance switches and elevators to find the objects that deactivate the electric fences. These various triggers are scattered all over the map, so youâ€™ll be forced to wander to one side, set off a switch, then go all the way back to the other side of the map and see if you can find the lowered platform or deactivated fence. Unfortunately, the map does not point out these changes.

And this is the biggest problem with the game. This sort of aimless wandering back and forth looking for switches and doors is no fun. To make matters worse, the monsters respawn at an alarming rate, even on the easiest difficulty setting. Although this was probably done to maintain a continuous challenge while youâ€™re going back and forth looking for switches, itâ€™s really quite annoying to have to clear a pack of bad guys you have already destroyed. 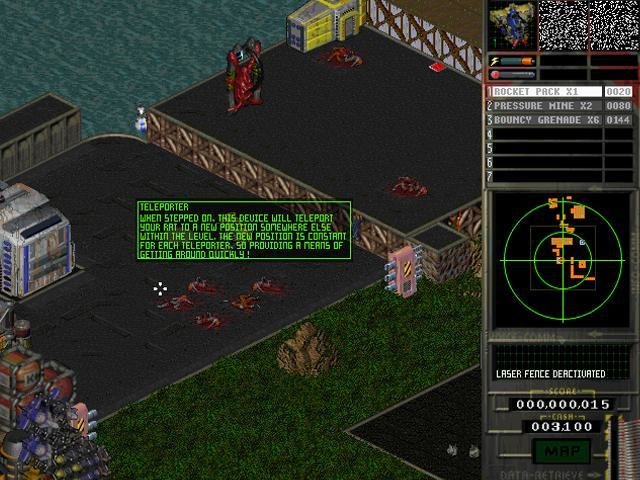