Return of the plastic not-so-fantastic.

The first Army Men game was taken to task for not going far enough with the milieu and 3DO has rectified that, to a certain extent. Mostly action with a thin smattering of strategy thrown in for variety, Army Men II puts you in charge of green GI “Sarge” and his platoon of cannon-fodder. You’ll battle the evil tan army across a variety of battlefields from our world and theirs. In their world, units are to scale with trees and such, but cross through an inter-dimensional portal and it’s the equivalent of Toy Story with mortars and bombs. Use the magnifying glass to melt enemies.

Improvements are across the board. You can save, carry more weapons, have better control of your units and play the game in one of three difficulties. The only areas of neglect are the visuals and controls, the first because it looks less polished than even the previous game, and second because Sarge is still too unwieldy to move around. You’ve got two options for controlling Sarge and his troops: either directly with the keyboard or by clicking with the mouse, but he can also issue specific orders such as defend, rally, or hold. Formations would’ve been a wonderful addition, since troops often get too clustered.

This isn’t quite the problem it might be, since most of your time is spent just controlling Sarge. He’s a tough old bastard that can dish out a lot of punishment, but you need to focus your attention on him, lest he catch one too many mortar rounds in the face. Having all those green troopers around often just confuses things. And controlling Sarge is when the game becomes really fun. He can carry six different items, and as he switches from a rifle to say, a mortar, his pose morphs into the ‘right’ pose for army men afficionados. Likewise the bazooka, flamethrower, or when he lays prone.

Mortar rounds throw up gouts of flame, trees will catch fire and forests will burn. Any unfortunate troops caught in these fires will, of course, melt!  Depending on how much of a deviant you were, other memories will be invoked by some of the wicked weapons available: a giant magnifying glass to focus the sun’s rays; a can of aerosol spray that shoots flames, and M-80’s strapped to the backs of unfortunate troopers.

In addition to the single player campaign, a nice variety of multiplayer games is available. There’s basic Deathmatch, Capture the Flag, and some intriguing varieties such as Black Flag, where the player holding the single black flag is the only one who can accrue points by killing enemies. A nice addition to the multiplayer options is the ability to play these games against AI opponents. Overall a nice effort from the original, but still just a merely okay sequel. 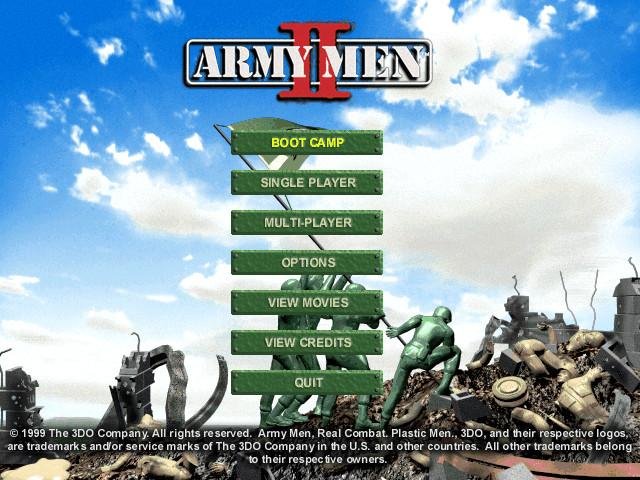