Desperados: Wanted Dead or Alive is a love it or hate it kind of game. Either you hate puzzle-based strategy designs that force you to “get it right,” reloading saved game after saved game until you figure out the proper way in which to complete a mission, or you love the challenge of figuring out how the designers want you to approach a specific scenario. If puzzle games are to your liking, Desperados is well worth your time.

Much like Commandos: Behind Enemy Lines, the game it most resembles, you need to approach each mission as if it’s a puzzle. You lead a small squad of outlaws through twenty-five gorgeous scenarios. Each member of your team has unique abilities and it’s up to you figure out the best way in which to utilize them. Thankfully, the game isn’t so scripted that only one plan of attack works. Usually there are multiple solutions to certain problems, especially once you get your entire team together. The level art is quite superb, isn’t it?

Your gang consists John Cooper, a quick drawing tough guy that reminds you of Clint Eastwood and who suspiciously resembles Bruce Willis. He carries a knife, which he alternately uses to gut people or free them from capture. Other partners include Sam Williams, a former plantation slave who is good with explosives. Doc McCoy is the team’s healer. Kate O’Hara is the sex kitten who distracts guards. Mia Yung is a blow dart expert and uses her pet monkey to distract enemies (I’m not joking). Finally there’s Sanchez, the hefty Mexican who drinks Tequila. So yes, it’s quite a colorful squad of outlaws.

The environments in each mission play a key role. In fact, studying the landscape is critical to success as it all factors into the puzzle of each scenario. For example, high grass is good for lying lowâ€”so much so that if you are in tall grass it’s virtually impossible for the enemy to see you even if you are shooting at them from five feet away. Using your character’s items in conjunction with the terrain makes for some compelling and rewarding gameplay. There’s no fog of war either, so you can pan the camera anywhere to plan your moves and watch enemy patrols.

The bad guy and townsfolk AI is scripted, but in a game like this that’s not necessarily a bad thing. If a commoner sees a dead body lying in the street he or she will run off and alert the authorities. Thankfully, you can drag bodies out of sight as to avoid such a calamity. However, your teammates’ AI is a bit odd in that it’s completely nonexistent. Your team does nothing at all without direction. Even when being filled full of lead they sit there and take it with a smile.

The biggest problem is that the game is exceedingly hard, and there are no difficulty settings to aid the unsuspecting. Even with the ability to save your game at any point during a mission, the game is just too damn tough and unforgiving. All it takes is one false mouse click or a missed shot that alerts guards and it’s time to reload. Nothing is more frustrating than playing a mission for an hour, forgetting to save, and getting killed by a sniper that you didn’t even see.

In conclusion, Desperados is a tough nut to crack. While it’s impossible to overlook the game’s unforgiving level of difficulty, it is often entertaining. If you have a plethora of patience and are looking for a wildly challenging puzzle/strategy game set in the Wild West, then go for it. 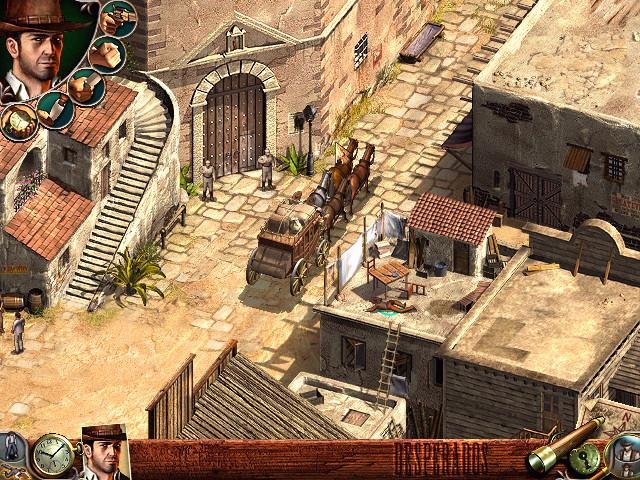