The premise behind Tactical Ops: Assault on Terror will sound familiar to anyone who has played Counter-Strike. Special Forces and Terrorists are pitted against each other in realistic environments. Each side has various goals that go against the other side, be it hostage rescue or bomb defusal. You earn cash by killing off the opposition and gain access to better weaponry, which you can purchase at the start of each round with the B key. As with CS, weapons are realistic, making combat fast and brutal, and the AI deadly accurate. 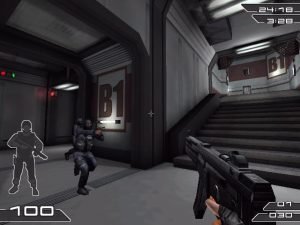 In all, Tactical Ops is the most unsubtle rip-off of Counter-Strike, with the obvious difference that it’s powered by the Unreal Engine instead of the Half-Life engine (even the menus are identical to those of Unreal Tournament, actually). But while the bot AI in Unreal Tournament was nothing short of revolutionary, in Tactical Ops it’s a bit more flaky. Your AI team members go in single-file through the various invisible path nodes, occasionally get stuck and aren’t as nimble in a firefight as you’d expect them to be (whereas in UT you’d see bots prance and dodge all over, here they just sort of stop, aim and shoot each other out).

Tactical Ops is primarily an online multiplayer game, mind you, but you’re welcome to play through any of its 30 or so maps with the bot-driven practice mode as either Special Forces or Terrorists. All of the maps cover realistic environments, be it warehouses, city streets, military bases, ancient ruins and whatnot. These maps can range from small to huge, usually with more than one path to an objective – a lot like standard CS maps, really. You can’t set your starting funds, but can skip the initial tedium of pistol fights by using the ‘endround’ console command.

You won’t find anything in Tactical Ops you haven’t already seen in Counter-Strike, with the notable exception of Unreal Script-powered bots (though the tweaked AI here makes them a bit more catatonic that they should be). In every other respect this is a rip-off through and through. But for whatever it’s worth, it’s not a particularly terrible rip-off.