Cairn, a side-scrolling adventure/arcade game, takes place in a pyramid-shaped city with eleven walled levels. As an apprentice thief, your goal is to reach the summit and prevent the assassination of the duke who rules the city — if you fail, you’ll be framed for his death. 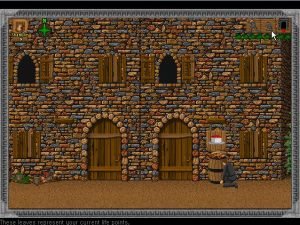 Naturally, it’s not a simple job. You’ll need weapons and information first, and that means running a seemingly endless series of errands for just about everyone who’ll talk to you. These errands are simple enough — go get an object and bring it back — but there’s little challenge to them. You’re told exactly where the object is, and because the city is laid out in such an organized fashion, there’s seldom any question of how to get there. So a big part of the game consists of holding down one cursor key and running through one non-descript scene after another.

The only time the game becomes a challenge is when you’re in a maze like the Wizard’s Tower, or his hedge maze. And then it becomes unreasonably difficult. The Wizard’s Tower is especially frustrating, because most of its rooms are not connected by doors or passages — instead, you step into an alcove that teleports you to another room. Problem is, re-entering the teleporter you just arrived in won’t take you back to the last room — it sends you to another room altogether. Mapping this maze is close to impossible, and it’s about as far from entertaining as you can get.

You’d think a little combat would make Cairn more interesting, but all it manages to do is increase the frustration. In fighting mode, your character responds very slowly to an arcane system of keyboard or joystick commands. And there seems to be no rhyme or reason to defeating an enemy: In one moment, a flurry of mixed attacks won’t be enough to kill a monster; then the next time around, two simple jabs will send the same enemy to its grave. To make matters worse, any hit you receive to your back or side kills you instantly, so if you find yourself flanked by enemies, it’s time to restore an earlier save