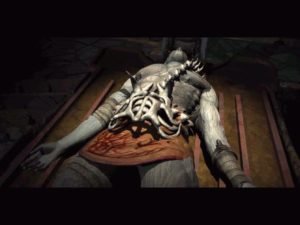 You wake in the middle of a mortuary with a splitting headache and no memory of who or what you are. That’s the opening of Interplay’s Planescape: Torment – players take on the role of the Nameless One, a creature who wakes up one day with no memory or even any idea of who or what he is. The Nameless One discovers a cryptic message carved into his back – apparently it’s a note to himself. And with that, players have to make their way out of the macabre mortuary and into the labyrinths of Sigil, a city of darkness, magic, and portals that lead everywhere and nowhere.

Torment is based on TSR’s Planescape AD&D universe, which means that instead of elves, dragons, and orcs, players will encounter undead zombies, liches, and other things that go bump in the night. Sigil, the city where most of the action is located, is the central hub of the universe, where portals open to all other dimensions. This rather bizarre location, along with an immortal main character who’s lived and died so many times that he’s become an expert at anything and everything, lets the developers do things we’ve never seen before in an RPG – and they do it incredibly well. 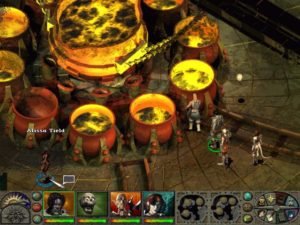 As with games based on TSR’s D&D, the real charm behind Planescape Torment is the rich universe that it draws from. From the very beginning, the mystery surrounding the Nameless One is a gem. The story is mostly contained in dialogue trees, however, so players should expect to do a lot of reading (even though the game ships on 4 CDs, there aren’t many spoken lines). While most of the quests are fetch-and-carry jobs, they have some of the most interesting storylines. The Nameless One might be pursuing objects that have severe impact on the world, or perhaps just uncovering a spy’s secret plot.

People who have played Baldur’s Gate will feel right at home. Automaps now have auto-notation, as well as custom notes. The journal breaks up quests into completed and assigned categories. On-screen characters are larger, and the backgrounds far more animated. Even the spell effects have been redone to make them bigger, better, and much more impressive.

Just as in Baldur’s Gate, players can pause the game at any time, assign tasks to their party, and unpause. However, the modifications Black Isle Studios made to the original engine keep players in the game at all times – instead of watching player interaction or combat statistics scroll by in a tiny text window at the bottom of the screen, messages float up from the characters in the game window. Right-clicking the mouse brings up a mini-menu, where players can instantly access spells, skills, items, weapons, as well as game options, inventory, the automap, and the journal. This ease of access means less time messing with windows and buttons in the interface, and more concentration on what’s going on in the game.

When players start the game, they can distribute character points to various aspects of the Nameless One, but that’s the last bit of out-of-game modification they can do. The rest of the Nameless One’s career is determined in-game, through asking professional specialists to train him, or seeking instruction with a master. 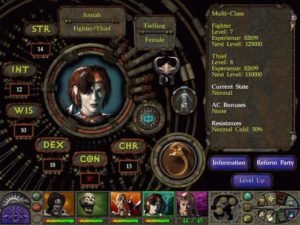 When the game starts, the Nameless One is a basic fighter, but he can become a thief or a mage by simply asking the right people the right questions (and usually solving a few puzzles). Also, alignment is determined through game actions and dialogue choices – players can choose to be a nice guy most of the time, or a total asshole to everyone they meet, and the alignment will change accordingly. What’s even better, though, is that no matter what alignment players choose, there’s a way to get through the game (although it might be more difficult to get through the game if everyone hates you).

While you won’t find a multiplayer bit, this is no great loss. With so many different ways to get through the game, it’s likely that many players will go back through just to see the alternate solutions and discover some of the secrets they may have missed. When it comes right down to it, this game is a masterpiece of computer roleplaying, with some of the best storytelling and atmosphere you’ll ever have the pleasure of encountering.