Even with some limitations, Medieval is still a great strategy game.

With Shogun: Total War, developer Creative Assembly delivered a seamless blend of epic real-time combat and traditional turn-based gameplay. The result was a superlative strategy experience. The sequel, Medieval: Total War, continues Shogunâ€™s success, adding even more strategic depth in the turn-based section of the game. The result is an extremely addictive game hampered by only a few minor problems.

Like Shogun, Medieval: Total War takes a snapshot of a highly-volatile section of the world and drops you directly into the heart of the conflict. In this case, the setting is the Middle Ages and the battlefield stretches from the western edge of Europe to the Middle East. There are 12 playable factions, ranging from the Egyptians to the English to the Danes, and three possible starting dates: 1087, 1205, and 1321. The starting date will determine which units are initially available to you. Regardless of which starting date you choose, the game will end once you reach the year 1453. The two possible victory conditions are Domination and Glorious Achievements. As in Shogun, youâ€™ll spend most of your time playing the game from the turn-based â€œgrand strategyâ€ screen. From here you move your pieces around the board, adjust taxes, monitor conflicts, and build structures and military units.

Because Medievalâ€™s setting roughly coincides with the historical Crusades, religion plays a major role in shaping the game world. You’ll have the Roman Catholic Church launching Crusades to take back the Holy Land. When this happens, a giant cross appears on the map and thousands of Christendomâ€™s finest soldiers begin their long march. These battles can decimate your territories if you play as the Muslims, especially if your military is weak. And youâ€™re not free of the Churchâ€™s influence if you play as a Christian nation either: an Inquisition can spring up and annihilate any heathen generals under your command.

Adding to the deliciousness are assassins and emissaries. Assassins can try to eliminate enemy generals or religious leaders, while emissaries are your primary diplomatic contact with rival nations. Emissaries can propose cease-fires, alliances, marriages, and bribes; if a bribe is successful, the enemy general will join your side and hand over the territory he represents. Most impressive, though, is that Medievalâ€™s AI can handle all of these elements, usually to great effect. Ultimately, Medieval is about battle, and in this area you have two choices. The first is to let the computer resolve the conflict automatically (the victor is determined by force of numbers and skill), while the second is to head in and lead the troops yourself in the traditional 3D battlefield. The latter real-time mode is nearly identical to Shogunâ€™s. You position your troops in an initial deployment, call in reinforcements (if any are available), and control all of your forces as they wage bloody war. As before, thousands of men populate the screen.

Morale and fatigue also factor into the mix, and with proper use of tactics a smaller force can decimate an army with superior numbers. More than once, the enemy had twice as many troops as me and I was still able to beat him, though with huge losses on my side. In the end, you’ll have a lot of fun with Medieval, especially if you’ve already played and enjoyed Shogun. 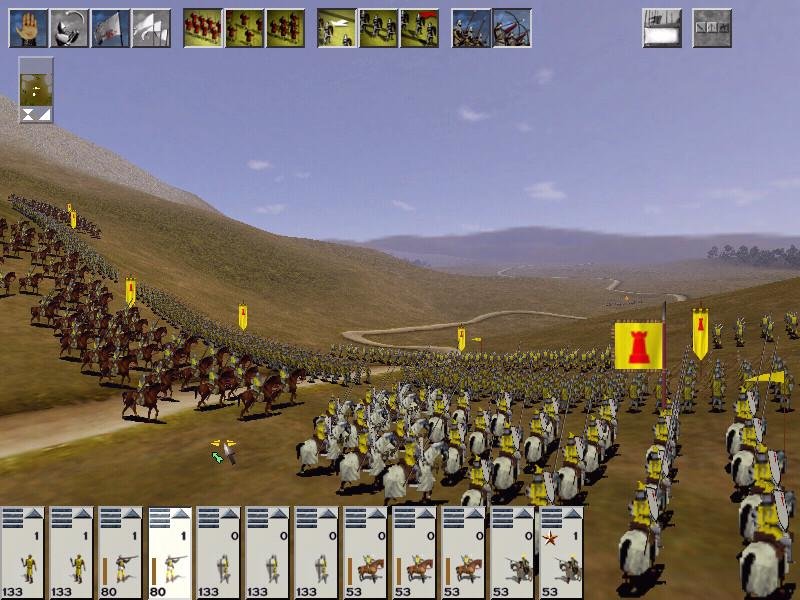