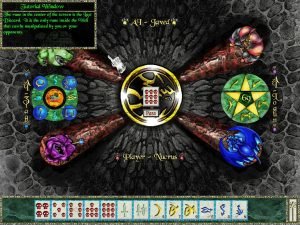 The most common form of Mahjong on the home computer is the Solitiare version. A simplified game where you have to match tiles, usually as part of a large set that forms a shape of something like a pyramid, bridge or other such structures. The more complex version of Mahjong, which was popularized and had spread from Eastern Asia mainly in the past century, plays like a card game with up to four players The Isle of the Four Winds: Rune War is a puzzle game that is less Solitiare Mahjong and more strategic tile game Mahjong that is often played in countries like Korea, China or Japan.

The twist to Isle of Four Winds is that includes a campaign mode vaguely reminiscent of Hoyle’s Majestic Chess, where you must embark on territorial conquest as part of your tile-playing saga. The game is more complex than you might think, since the Rune War section is pretty much a different game entirely. As you progress with your Mahjong hands, you’ll receive magic spells and monsters that operate under your command, and other benefits based on the tiles you play. These awards are used during the tactical mode. So the basic idea is, you play Mahjong to get advantages you can use to conquer the map.