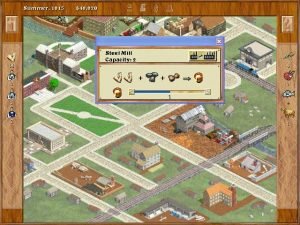 In Imperialism, your goal is to become the preeminent imperial power in this fictional or historical recreation of a 19th Century world, but unlike previous games of this type, you don’t necessarily go about achieving this goal through military conquest; while that is certainly an option, diplomacy and economics play important roles in your quest, and the application of power in these realms (along with military) can lead to your being declared victor in the Council of Governors. Gameplay is perhaps best described as a mixture of Civilization and Colonial Conquest.

Your first goal is to build up your economic infrastructure, something quite beyond the usual resource gathering of this sort of game but much simpler than the economics of an actual business sim. The centralized nature of your economy may not be entirely “realistic,” but it speeds up gameplay and involves less busywork than specifically managing all your cities’ output. Developing your transportation network – the key to your economic power – is an activity you must balance with your other endeavors.

Perhaps the most innovative part of the game comes in its portrayal of diplomacy. While you can use military might to conquer surrounding nations, you can also use diplomatic muscle to sway nations and even to bring “minor nations” into your empire. Set up embassies, establish trade subsidies or boycotts, and give foreign aid. Aside from establishing influence over other nations, diplomacy effects your trade relationships which in turn affect the materials and goods offered to you on the international market; when you start the game you can almost bet your lands don’t supply everything, so trade is vital to expansion.

Military power is still a prime part of Imperialism, especially in the mid- and end-game when most of the minor powers have been absorbed. As with other factors, you have to balance the growth of your ground and naval forces with that of your civilian and diplomatic empire – a fine pickle of a problem when you’re in dire straits in both areas (the time when Imperialism is at its best). 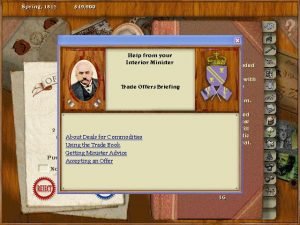 While the game is in general loads of fun, there are a few weaknesses. The graphics, while pleasant, tend to be somewhat bland. The AI is fine but the computer is not terribly aggressive – you can often leave your land undefended. The biggest flaw in terms of gameplay is that taking a nation’s capital knocks it out of the game; a few sneak attacks against the computer can cut the game short very fast. But these are really just irritants and not fun stoppers. And despite the repetitive nature of your actions, starting another game in Imperialism reactivates the same addiction.