Someone stole a military simulation right out from under the Russian air force! Note the Cyrillic text on the HUD and cockpit.

The original Su-27 Flanker was arguably the apotheosis of the hard-core flight simulation. Impeccable detail went into every aspect of the “simulation” portion of the game…modeling weapons behavior, flight physics, recreating the various radar and weapons modes in tight detail, even the instruments were all labeled authentically in Cyrillic. However, the goal of realism came before all other considerations, even the consideration of the many and serious limitations that the computer pilot must face that make flying and fighting potentially even more difficult than real pilots must deal with. This severely hampered playability.

Today, many simulations compromise realism in the name of gameplay. And who can blame them; you want to sell product, and you need the widest market you can get to maximize your returns, so for many realism is unimportant for it’s own sake, it simply means more to some companies than others. Of course, the more compromises a simulation makes, the less validity it has as a simulation and a learning tool. The hardcore sim player wants a simulation to be exactly thatâ€”a very powerful learning tool and recreation of a coveted piece of machinery that few will ever have the chance to experience for themselves.

The Falcon Meets Its Nemesis

Much like it’s predecessor, Flanker 2.5 (an updated Flanker 2.0) adopts a rather strict, no-nonsense approach to simulation that’s both refreshing and perhaps a little intimidating. The design feels rather academicâ€”an authentic simulation with a minimum number of excess bells and whistles. Imagine if you will, the thought of a Russian aerospace firm making a cost-conscious military simulation that works on off-the-shelf computers, and you’ll start to get the right feel. Flanker 2.5’s greatest strengths and weaknesses both stem from this kind of mentality.

The payoff comes in an overall feel that hits all the right buttons for creating the illusion of a real jet fighter on your home PC. The flight model is frankly astounding. While nobody save an Su-27 test pilot would know for certain how authentic the flight model really is, every action you take in flight just feels right. Even among simulations with top-notch flight models, you will almost always find circumstances where things feel rather fake. In Flanker 2.5 however, just flying around has such a fluid and believable feel that one could spend hours doing nothing but joyridingâ€”buzzing cities like a wanna-be pilot at the Paris Air Show.

The biggest problem with the hardcore approach is trying to maintain a sense of situational awareness. In the real world, a Flanker pilot has the benefit of sharp eyesight, a bubble cockpit with a great big field of view, and very active ground control taking charge of the situation and vectoring the pilot onto targets with a tight leash. In the game, however, you have a narrow 45 degree field of view, objects that are only displayed at their actual size (i.e., everything is very tiny until you’re very close, then it just zips past), poor visual resolution, and no vectors from ground control whatsoever. This leaves you in the unenviable position of being blind to your true situation almost continuously (and often until it’s too late).

Fortunately, this is somewhat ameliorated by the provided “air combat view” that keeps you looking at your target, and the padlock view that can be initiated whenever you have a visible foe handy. Alas, despite these views, life is extremely difficult when a missile is launched at you. There is simply no padlock command to help you see it incoming to help you maneuver against it more effectively. In USAF, you can expect to dodge at least four out of five missiles. In Flanker 2.5, you’re doing well if you can even dodge one out of two. If this issue had been somehow circumvented, the game would a good deal less frustrating.

But perhaps such odds are in the name of realism. The computer aircraft fight very hard against you. Not only do they fight to the limit of their machine’s abilities, they do it in a very atypical way. Watch how your foe maneuvers during the fight, and you may end up with the impression of a pilot fighting at the controls rather than a nameless drone. It’s a subtle, but very noticeable difference in the AI that gives your opponents a much more “human” feel.

Reaching for the sky The cockpit is a panning virtual cockpit, with instruments that are clear and easy to read (aside from being in Cyrillic). The engine sounds are very pleasant, and the fly by view definitely has an “airshow” feel to it (crank up the volume and listen to the thunder a moment after the jet zooms past). All the control surfaces are articulated with damped motion that creates the feel of real world systems. Best of all, the mirrors actually work! While the image in the mirrors is crude and pixellated, you can, when you’re frantically looking for your opponent, sometimes spot him in one of the mirrors.

SU-27 Flanker had a learning curve steep enough to make even a Swiss search and rescue team balk. Where most sims offer various degrees of fidelity in modeling radar and weapons employment modes, and even different padlock options, this series simply models the one, authentic, mode, and that’s all. Either you learn to operate the equipment like the real pilots do, or you just don’t do it at all. While there’s a lot of sense in designing that way (after all, easier modes take lots of development resources too), players needed a way to help them overcome the obstacles, even if they don’t have crutches. Flanker 2.5 addresses this with a comprehensive series of training missions. In each mission, the computer demonstrates how to do a particular task, while a narrator explains each step. It doesn’t make the game any less complicated, but it makes learning the Flanker a far easier task.

In the running for the ultimate jet combat simulation, Flanker 2.5 concedes one major point to Falcon 4.0. While Falcon 4.0 is a war simulation centered around a particular aircraft, Flanker 2.5 is simply a very hardcore flight simulation with missions tacked on to it. While missions can be split into phases, there is no real campaign per se. In fact, this game won’t even declare a mission pass or fail in the traditional way. At the end of each mission, a tally of events is displayed, and you can judge the results for yourself. These differences don’t ruin the game, but it simply can’t begin to approach the incredible depth of Falcon 4.0. Flanker 2.5 is simply little more than a very detailed, very believable simulation. 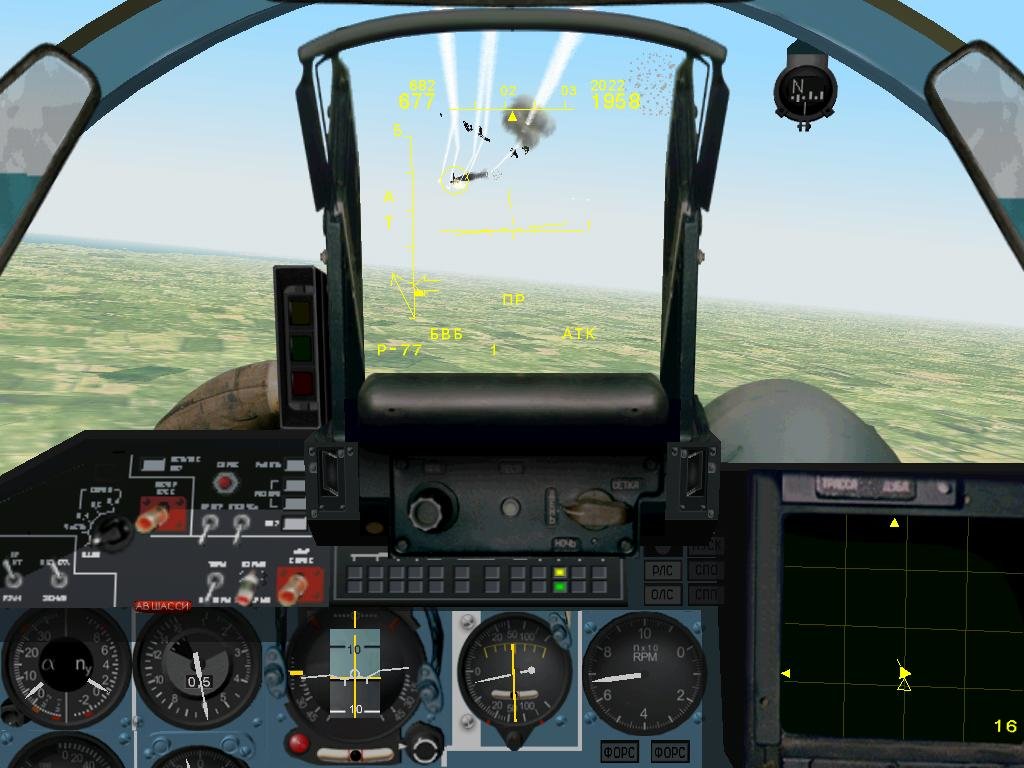