Ash Williams, the bad ass zombie hunter from Evil Dead, is back, voiced as always by horror film star Bruce Campbell. This time, the storyline deviates from the big screen trilogy, placing Ash in an urban dead-ridden environment post-Evil Dead II. Regeneration’s more action-oriented gameplay is pretty much what you’d expect: Our hero kicks ass, carries a big shotgun, and spouts disposable one liners. Still, one can’t help but remember the previous Evil Dead game – Hail to the King – which was an unmitigated disaster. The console-only follow-up, A Fistful of Boomsticks, was even worse. Regeneration, surprisingly, isn’t as bad as you’d expect. 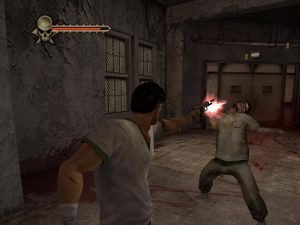 You run the expected gauntlet of creepy mines, shipyards, asylums, and a swamp, in pursuit of a certain Dr. Reinhard in an effort to put a stop to his necromantic ways. Don’t run in expecting a survival horror, as the game’s reliance on action and dark humor makes it about as scary as Painkiller. Ash can kick some serious ass using his chainsaw and pistol, can perform combos, and does cool finishing moves that look quite cinematic. You eventually trade the pistol for a shotgun, flamethrower (crowd control) or harpoon (pulls enemies towards you for some chainsaw slicing and dicing).

The targeting system and controls were sound. You can switch between targets and shoot them in pretty conventional console fashion. This works fine over long distances, but becomes confusing when fighting a large mob close up. The flamethrower is infinitely more useful in those situations. The levels and general gameplay, however, become quite repetitive a few hours in, and eventually you realise the game has pretty much showed all of its tricks. But as an Evil Dead game, it still fares far better than any previous installment.