The Knights Templar are at it again. What is it? The robes? The swords? Is it the religious fervor of pillaging distant pagan (and in some cases Christian) lands? Whatever the case, Mindscape thinks it’s time to give the age-old Templar motif a different spin with Azrael’s Tear. After a year of massive tectonic upheavals, the seas have diminished, and new land masses have emerged from the waves, complete with ancient ruins teeming with priceless artifacts and treasures. The archaeologists of yore have been replaced by ‘raptors’ â€“ greedy, sniveling thieves armed with hi-tech gear and an appetite for wealth.

As one of these individuals, you will venture forth into the ruins of Aeternis. Your quest? To locate the long sought-after Holy Grail, rumored to be concealed within the ancient bastion of the Knights Templar. As you venture forth through the dark, cobweb-filled corridors and chambers, you’ll soon discover that other looters are aware of the potential prize, and are already rummaging throughout Aeternis. Surprisingly enough, you’ll also run into the Templars themselves, now pushing some 800 years in age. These folk are not too pleased to have visitors, and aren’t opposed to the use of excessive violence to curtail their activities.

While the plot may not be the most level headed, it deepens rapidly as the adventure progresses. The ancient pages from a diary, conversations with ghosts from the past, how you deal with the ancient guardians, all such things blend together to give this game a pace which keeps your curiosity peaked. The first person 3D engine adds to the game’s plausibility, as you move smoothly through room after texture-mapped room. This also isn’t a challenging, puzzle-heavy adventure. Although you will encounter plenty of obstacles, each can be solved logically, with the aid of the various tools to be found throughout the ruins. There are a couple of “find the microscopic hotspot” teasers, and there’s also a water re-direction puzzle which may take some time to solve, but the majority of conundrums are well within most gamers’ abilities. Azrael’s Tear was released at around the same time with Quake, which might explain why it didn’t catch the spotlight or sell very well despite being a good game. But despite its relative obscurity, Azrael’s Tear is usually good to make it worthwhile. 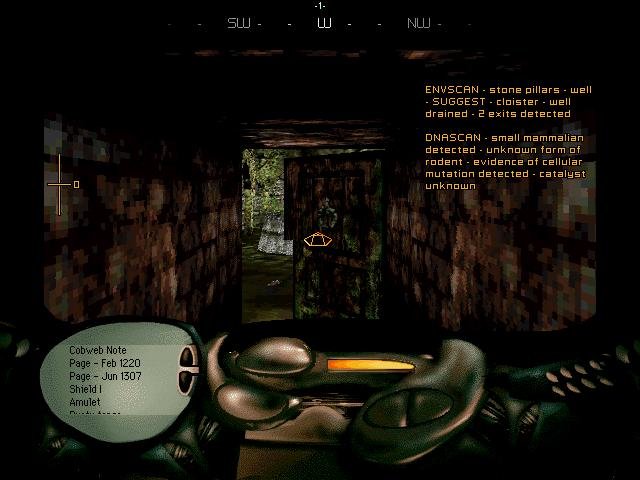