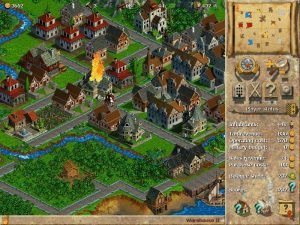 1602 A. D. is a big game with varied terrain, civic buildings, varied production options, military units, and defensive emplacements all mixed up in a bunch of scenarios and continuous play. Here, weâ€™ll attempt to tame this complexity by describing the rise of a typical colony in continuous play. This is just as applicable for scenarios, as each contains some subset of the problems encountered in continuous play, although stressed to a greater degree.

Overall strategy in 1602 A.D. can be summarized thusly: start small and expand peaceably, trading with everybody. Try to reach profitable plateaus at each of the intermediate levels (Settlers, Citizens, and Merchants) before attempting the next level; only fight a war when necessary to expansion and only when youâ€™re turning a profit. Consolidate war gains with settlements on the newly cleared lands. And always make sure thereâ€™s enough Cocoa Puffs.

The first thing you should do is sail your ship directly to a large island, explore it, and start there. Pick an island with a mountain or two, a decent-sized forest, and a bunch of flat land. Donâ€™t waste your time looking for the perfect island. Youâ€™ll need to get as fast a start as you can. Now youâ€™ll need to set up some buildings. Start near your warehouse and put in some fishing huts. Run some roads and put in houses. Build in 2-by-2, 2-by-3 or 2-by-4 blocks. Decide where your city center is going to be (somewhere reasonably near the center of the livable area) and leave some open space there for later. Start up a couple of sheep farms or cotton plantations and a weaverâ€™s hut (the game seems to like a 2-to-1 ratio of raw material production to refinement) to make cloth. This will put your colony on the path to Settlers, and who wants a bunch of naked Pioneers anyway?

About this time thereâ€™ll be a huge dent in your starting balance and itâ€™ll be getting worse all the time. It can seem like all you ever do in 1602 A. D. is spend money. Every new stage in your progress up the development ladder means paying for new buildings and importing ever more exotic goods. Howâ€™s a would-be colonial governor supposed to pay for all this? Your two major sources of income will be trade and taxes.

Of the two, trade is the more familiar. Not just a source of stuff you canâ€™t make for yourself, trade can provide a needed source of revenue early in the game when youâ€™re building a lot of buildings and donâ€™t have many people or a high development level. Of course thatâ€™s the time when youâ€™ll have the fewest things to offer in trade. Luckily your trade partnersâ€”the independent merchants, the pirates, and the other coloniesâ€”will have various needs. (And speaking of pirates, youâ€™re best off ignoring them and hoping they ignore you. Crush them when you get a chance.)

Independent merchants are somewhat unreliable, coming and going like the wind. Still, in the early game they can be the only source for some crucial stuff (i.e. tools) and they serve as a handy and steady source of trade revenue throughout the game. Best of all, they arenâ€™t potential competitors! 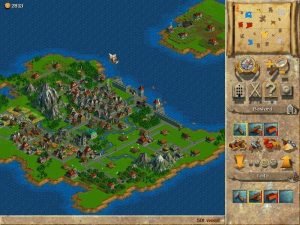 The other colonies seem to mostly be at the same development level as youâ€™re at, so theyâ€™re trying to buy the same things you are, and export the same things. Not all that helpful, really. There are two workarounds to this. One way is to watch for new enemy (err, trade partner) colonies. Theyâ€™re usually at a low development level, so you can sell them basic stuff that you have a surplus of. The other way is to get ahead of the curve. If you develop a type of resource before another colony does, you can often supply it to them. Jewelry is an excellent example of this.

The other way to make a buck is taxation. Colonists seem happy to pay 32% taxes (and higher) as long as their needs are being met. If youâ€™ve got a well-supplied island, a 50% tax rate is not out of the question. This may actually be a tax break in Sweden. The easiest way to increase taxation income is to move the taxation rate slider bar. Jack that baby up to the max that can be supported and let the good times roll. Move it back down when resources are tight. It doesnâ€™t cost anything and can pay off handsomely.

Of course, you could just build more houses. Itâ€™s worth building a few tenements on feeder islands just to make a few extra bucks. A more complicated (but ultimately more profitable) method is to raise your development level. For some reason, the higher your development level, the more people live in a house and the more taxes can be gotten.

Raising your development level can be tricky, in planning, implementation, and aftermath. A perfectly fine colony can go straight down the tubes from a mismanaged transition. Plan that transition carefully. Pay careful attention to immediate issues and sustainability. 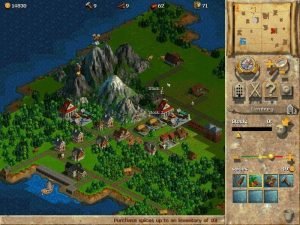 Ideally, the materials needed to implement the transition should come out of surplus, not from cuts elsewhere (and especially not out of cuts to military preparedness). Make sure you can sustain growth with new resources. Sure, youâ€™re growing cocoa now and some Citizens would be nice. But how much cocoa are you growing? Enough to feed all the new Citizens who will arrive? Or will they be burning down the chapel because thereâ€™s no Cocoa Puffs left?

Implement the transition slowly. You can always refuse to issue the needed upgrade materials to your colonists. Without the materials needed to upgrade their domiciles, they will be unable to move to the next development level. This is a drastic move and portends future disaster. Obviously your planning wasnâ€™t thorough enough.

Deal with the transitionâ€™s aftermath calmly. So you donâ€™t have enough cloth for everybody, youâ€™re bleeding money from all the buildings you had to build to get here, and the Blue colony has declared war on you while you were busy beating swords into plowshares. What do you do? You can always tell your warehouses to refuse to issue the upgrade materials. This will handle the growth. Then deal with the money. Turn off all industries that arenâ€™t making money through trade or directly supporting the lower level of development. Feel free to bulldoze expensive industries and entire housing developmentsâ€”this is life or death. Get to a point where youâ€™re stable again at your starting level.

Now you should be itching for a fight. All this trouble was undoubtedly the Blue colonyâ€™s fault and itâ€™s revenge time. Money is the sinew of war and weâ€™ll assume youâ€™re running a profitable colony. War doesnâ€™t usually occur until reasonably late in the development cycle. By this time youâ€™ll have one or more islands humming along (in addition to several islands devoted to nothing but producing raw materials for the big islands). Be sure you can build all the implements of war yourself. Thereâ€™s nothing worse than finding out you have to go to war against your only supply of cannon. Ask Robert E. Lee.

Build a couple of boats. Battleships are particularly niceâ€”they can kick the crud out of anything else, carry a reasonable number of soldiers, go fast, and double as trade vessels in peacetime. Theyâ€™re also useful for shore bombardment while your ground units are busy destroying things inland. Battleships are not cheap, nor is the workshop where theyâ€™re made, or the raw materials that go into them. You wanna win, or lose with the most money? 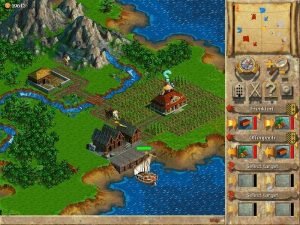 Load a few land units into the boats. A mix of cavalrymen, musketeers (or infantry), and artillery is worth it. The artillery is good against buildings, the rest works well against any unfortunate opponent units. Find the opponentâ€™s main island. The computer (and you, too, most likely) will have all their high-maintenance buildings on one island along with their biggest warehouse. Sail there and bombard the warehouse. If anything shoots at you, kill it and return to shelling the warehouse. Opponent ships will arrive. They rarely come en masse, so pick them off as they arrive.

Always bombard the warehouse when not otherwise engaged. Eventually youâ€™ll destroy it. The computer will rebuild it. Destroy it again. This can get tedious but eventually the computer will run out of materials. When youâ€™re done, cruise around the opponentâ€™s islands, knocking out shipyards to secure the sea. After (or while) this is going on, set the ground troops ashore. Have them wreak havoc on buildings, starting with raw materials (and the castle, if one is around, to forestall defensive reinforcements). If they are shot at, shoot back and then resume pounding buildings. Pay attention to them, as theyâ€™ll stop shooting when the building they were assigned to destroy is finished. When the enemy is gone you can settle the land. Not much in the way of strategy here. The important part is to get to this point without going broke trying to maintain a good-sized army.