Squaresoft’s Final Fantasy VII came to the PC with all of its console legacies intact: low-resolution background graphics, a gamepad-centric interface, pre-determined save locations and cute anime characters with enormous eyes and unusual hair. It also brings its strengths: detailed plot, superb 3D graphics, superior production values and a huge amount of play time. Much of the praise heaped on the PlayStation version was directly related to its story, and it is indeed impressive, steeped in teenage yearning and melodrama.

Contrary to most role-playing games, the story Final Fantasy VII isn’t about one single character saving the world; instead, much as in Betrayal at Krondor, there’s a focal character that you don’t necessarily control throughout the game plus an ever-changing assortment of comrades helping out. As with the older Ultima games, travel is via two different scales â€” a city and world-map view. Where the designers of Ultima Ascension decided to drop the standard RPG multi-character party because they couldn’t properly represent it in 3D, Final Fantasy VII solves it by always representing your party by a single character in all forms of travel. It looks weirdâ€”the characters literally jump into one body before moving, and hop out at other pointsâ€”but it works.

The main player in the story is Cloud, a mercenary who is one confused dude. He sells himself out to a group called Avalanche, a guerrilla squad intent on destroying the big evil corporation Shinra, Inc. The story starts in the floating city of Midgar and quickly spreads to encompass the entire planet and a dizzying array of subplots. Before the end of the game you will have hooked up with multiple characters, each with their own detailed backstory that properly positions them within the context of the larger story.

The majority of the game is played in third-person mode, where you walk around and find objects and talk to non-player characters (NPCs). At any point during the game, though, you may find yourself breeding and racing Chocobos, snowboarding down a mountain, playing a pseudo real-time strategy game or riding a motorcycle. The combat and magic systems work beautifully. The combat is a phased system, taking place in a 3D environment. You issue your party members commands and watch them get played out in the 3D gameworld. After each command, you’ll have to wait a certain amount of time before you can issue another. While most of the graphics are duplicates of the PlayStation version (for better or worse). With a camera that swoops and zooms around the battle, it’s a virtual smorgasbord of 3D effects, never feeling gratuitous but always impressively authoritative. The beasts you face off against are all beautifully detailed, shaded polygon characters instead of the usual PC texture-mapped ones, lending them an otherworldly look that’s a far cry from your standard orcs, dwarves and elves. The only way you’ll experience a more surreal bestiary is by dropping a tab of acid and visiting your local zoo. The magic system is also noteworthy. No character has an innate ability to cast magic, but their weapons and armor have slots for Materia, and each of these orb-like elements adds spell effects in combat.

Some are defensive when placed on armor and offensive on weapons, and others summon spectacularly animated creatures to do the fighting for you. Certain weapons also have “linked” Materia slots, which allows you to combine the properties of certain Materia (of particular use is the “All” Materia, which causes spells, either offensive or defensive, to effect all of your party or the bad guys). The system can seem baffling initially, but once you’ve figured it out, you’ll learn to live with it.

There are some minor issues relating to cutscene rendering – you basically have to have the right codecs installed. But once you have those issues fixed, it’s a pretty nice ride overall. While the JRPG formula might alienate people weaned on Diablo and Baldur’s Gate, the formula nonetheless was a great hit with fans of the original series, which is exactly what a popular game franchise is supposed to do. 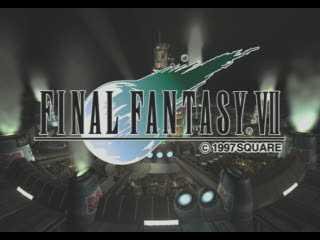