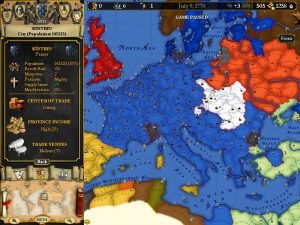 Europa Universalis is more or less real-time game (there is a real-time clock of sorts, but the pacing is much more Master of Orion than Age of Empires) covering 300 years of world history (1492 to 1792) as seen by one of eight great powers. You play the Gray Eminence behind one of these powers, influencing the monarch of the state and actually controlling literally every aspect of statecraft and strategy during the time period. As the name implies, it focuses more on European nations with a secondary focus on the rest of the globe.

This is not a simple game – a tutorial walks you through the very basics of management, expansion, conquest, and development (the basic elements of any “4X” title), but the devil lies in the proverbial details. Europa Universalis plays simultaneously at many different levels and constantly demands a great deal of situational awareness. It’s more Imperialism than Civilization, though more complex than either. The economic system is the heart of the game. It’s robust enough to accurately model development from the late Renaissance all the way through Mercantilism to early Colonialism. The game nimbly keeps track of a staggering amount of minutiae such as the inflationary effects of excess liquid cash, intergovernmental loans, trade policies, and a comprehensive list of commodities. While this sort of micormanagerial detail will usually fall below your radar in terms of management, it can have a serious impact on your foreign policy.

Equally impressive (and always with a surprising level of detail) are the game’s portrayal of technological development, domestic policies, and even religion (which includes developmental aspects such as the Reformation and Counter-Reformation). Obviously diplomacy is important in any game of this type, and Europa Universalis features a detailed system for dealing with diplomacy and relations with other states. When you send an ambassador to another state, you will typically have upwards of twenty options (including offers, declarations, and other miscellaneous negotiations). 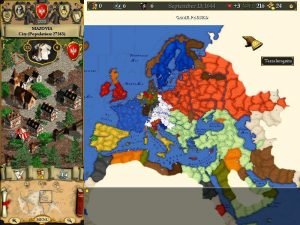 Paradox has not allowed this game to become 16th Century spreadsheet, however. The focus of the game is statecraft—alliances, wars, double dealing, and backstabbing-all the essential elements of an entertaining evening at home. Given the aggressive (and skillful) AI, you will not play for long before facing battle. Combat is important but not terribly detailed. It’s a simple but subtle system of Infantry, Cavalry, and Artillery. One interesting twist is that each army is given a fluctuating morale value which forces troops to behave realistically – in Europa Universalis you will never see troops fight to the death.

If you like your strategy games with historical, complex, and somewhat abstract gameplay, Europa Universalis is more than a welcoming addition.