Wizardry 7 Gold shines but does not glitter.

If you’ve already played the DOS version of Wizardry 7: Crusaders of the Dark Savant, you’re not going to find many surprises here. It’s basically the same role-playing game that was released in 1992, hailed back then as one of the best examples of genre. It’s been dressed up with full speech, a new musical score, and enhanced SVGA graphics, but essentially looks the same, plays the same and is the same. That being said, if you haven’t played Wizardry 7, then this Gold version is the best place to start!

The game involves finding maps hidden throughout the world. D.W. Bradley’s brilliant innovation in the game is having competing intelligent races of NPCs looking for and often finding the pieces of the map before you do. Then, you have to either kill these NPCs to get the maps or bargain for them. Races are allied with each other. Kill a member of one and find yourself at war with others. Another innovation is that the game has different starting points, depending on which ending you import from the game’s past iteration, Wizardry VI: Bane of the Cosmic Forge. All new parties start just outside of New City. Through a small maze and near the river is a chest with a map that allows a character with mapping skills to bring up an auto-map. Also nearby is a starter dungeon, necessary to complete before your characters are strong enough to enter and survive in New City.

Create six different characters to form a party (or use the party provided). They get experience by killing monsters. This experience translates to level raises. The game is non-linear, but balanced. Combat difficulty increases as the characters gain levels. The combat is turn based, not real time. It’s all standard Wizardry.

In 1992 Wizardry 7 was simply the best role-playing game ever. I still think it’s a terrific game, but this Windows version could have been more. The “new cinematic” graphic introduction as well as some of the other graphics are somewhat below par, and there are minor glitches in the interface. There’s already a patch available which you’ll need to fix parts of the game. 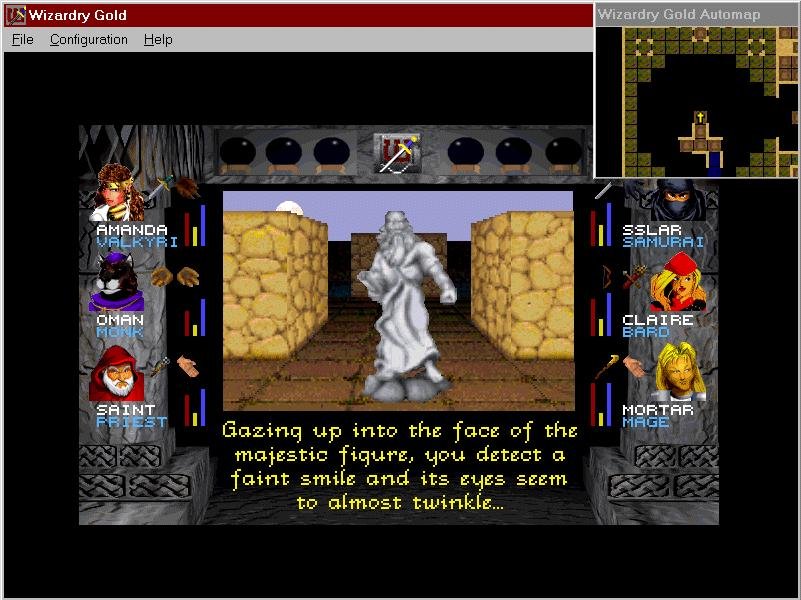