Mayhaps too much MTV and not enough Persia? Prince of Persia: The Sands of Time was easily one of the best games of 2003, dazzling its audience with creative platforming, beautiful character animations, a catchy soundtrack with an Eastern vibe and some of the most visually vibrant environments ever seen. It was one of those games that mesmerized long enough to make one forget it was all about money, seemingly having the perfect balance between style, story and gameplay. Can UbiSoft ever hope to outdo itself with a sequel?

Wrapped up in one sentence, Warrior Within is the anti-Sands of Time, in that it’s less about Arabian Nights and more about Godsmack and T&A. The reason behind this dramatic change of style is anyone’s guess, but it’s probably down to a desire to make the game more mainstream or just a misguided attempt at giving it a dark ‘edge’. In either case, Warrior Within generally conveys a darker, more combat-heavy style of play and imagery set in an uninviting (if still visually stimulating) gameworld. Instead of the vibrant multi-colored Persian palaces we’re instead greeted with gritty, dilapidated castles. Upbeat combat music gets replaced with loud punk rock, and the entire spin of the game shifts from half platforming, half combat to lots of combat and occasional platforming.

Check out how dark and edgy I am This big bad dude is the Dahaka.

But what tragedy could have molded our once well intentioned hipster Prince with a goatee to become an obnoxious, bitter and reckless jackass who throws insults like “You bitch!” during a swordfight? For the past ten years, it seems, our hero has been running from a supernatural being known as the Dahaka, a guardian of the timeline tasked with destroying the Prince for unleashing the Sands of Time in the first game. His only hope is to travel to the Island of Time and prevent the Sands from ever being created, thereby nullifying any quarrel that may have arisen between him and the Dahaka.

The story comes and goes and generally becomes more and more confusing, but on a whole the environments in which it is set are definitely a peg more complex than in the original, specifically in regards to level design. There’s a great deal of going back and forth between locations when solving various puzzles – some rooms act as hubs branching off into several areas, and at times you must solve an important puzzle in one location to unlock a path somewhere else. Things become even more interesting when a time traveling twist enables you to visit various parts of the island in two states – both as dilapidated ruins in the present or as opulent strongholds in the past, and in some cases it’s necessary to use this feature to bypass certain areas which can only be bypassed in one temporal state.

Navigating through the gauntlet of traps has likewise been made countless times more difficult, and this is indeed where the designers show their deviant side. Fortunately, our nimble Prince still has the uncanny ability to dodge, wall-run and leap over, under and past such obstacles with gravity-defying exuberance. In fact the best parts of the game are when you successfully figure out a series of difficult acrobatic challenges. Plus the controls are remarkably simple and easy to grasp, so you’ll be swinging, climbing and wall-jumping like a circus chimp in no time. A stroll through the Island of Time. Pirates Of The Persian Gulf The swordplay is a central part of WW.

Swordplay has seen the most improvement overall. Unlike those easy acrobatic puzzles, the combat system involves button mashing on a much grander scale. Stringing together a series of devastating attacks is a lot more harder than in The Sands of Time, but the system is far more dynamic as well. For instance you can hold two weapons simultaneously to connect many of the more complex swings, but you don’t have to. With one hand free the Prince can grab and hurl enemies off ledges, or even strangle and steal their weapons. The animations aren’t quite as awe-inspiring as before, but they’re still cool to watch.

But even if you do master the combat system you’re in for a tough fight, as difficulty-wise the game has been amped up considerably. In fact most players might find it hard to wrestle with on the default setting (there are three difficulties in all) even if they’ve aced the previous game. It also clearly shows that the game was kicked out of production much too early, showing some gnawing sound, music and framerate errors.

Yet despite its bugs, an unlikable hero, ass-candy for side characters and an improperly constructed atmosphere tying it all together, I’ve still found enough enjoyment and challenge in Warrior Within to play through it. And by all means it’s a fun game. It’s just a shame it lacks so much of the polish and magic from before. 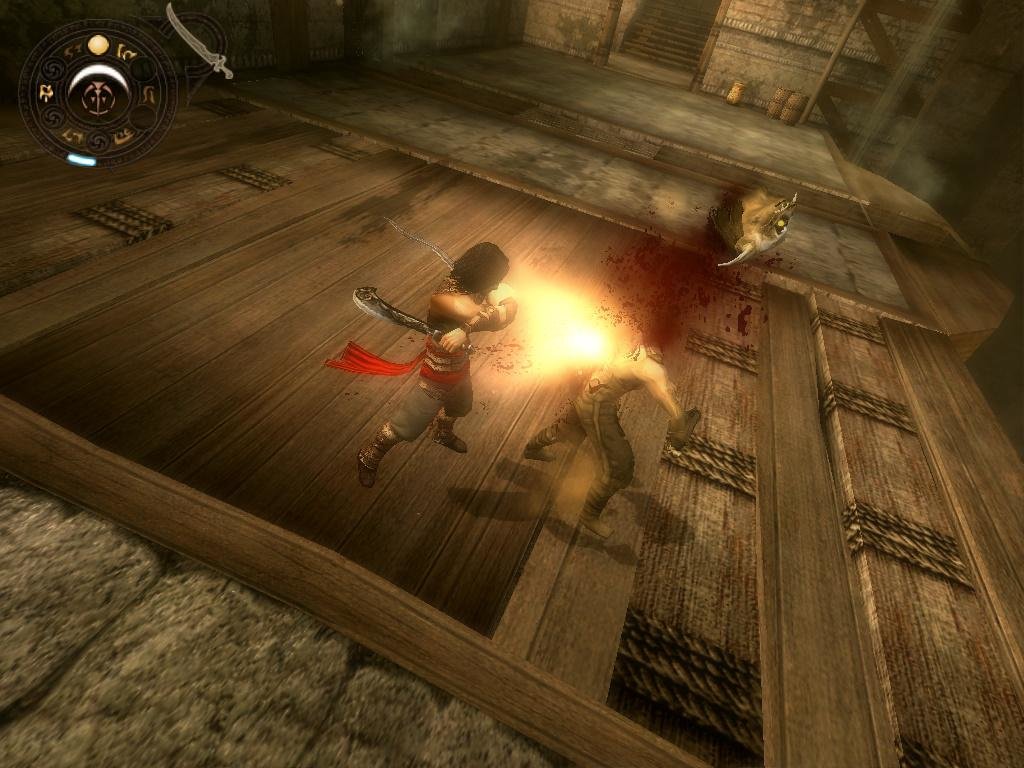