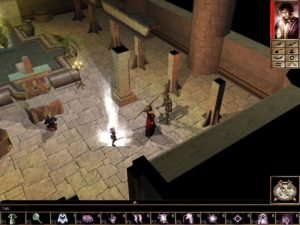 Take your time and comb through this massive RPG.

Neverwinter Nights is a huge, gripping RPG. Central to its pull is a storyline as persuasive as any you’ll encountered in a fantasy roleplaying game. Unlike many RPGs of its ilk, progression isn’t about getting that extra experience level. While the quality of items, weapons, and armor continued to dazzle deep into this marathon, the plot takes a first-row seat as well. From the makers of Baldur’s Gate you couldn’t expect anything less.

Neverwinter Nights pulls off a masterstroke of balance. Without getting into the minutiae of its inspirations and brethren in this genre, let’s just say that for the pure game-minded, NWN sits right in the middle (and arguably atop) the triumvirate of RPG splendor consisting of BioWare’s own Baldur’s Gate II, Gas Powered Games’ stunning Dungeon Siege, and Blizzard’s monumental Diablo II. It’s as replayable as Diablo II, with a vast treasure chest of equipment. It’s a visual feast of effects that pushes it beyond Dungeon Siege’s mesmerizing intensity. And it wends a tale of torment, salvation, and betrayal surpassed only in Baldur’s Gate II.

Play by the Rules

Neverwinter Nights follows the D&D 3rd Edition rules where it counts (and casts them aside in favor of better game balance when it doesn’t), with all the engineering issues of initiative rolls and swipes to hit, spell-effect chances, saving throws, and the impact of feats buzzing away as floating chunks of text. It’s a numbers game, where your hits, misses, damage, initiative and so on are elegantly displayed.

D&D rules supply info, and though I went through the game with a monk who focuses on melee (with a few spell back-ups), I’d like to free Neverwinter a second time with a spell-caster, as it seems to require just a little more experience to survive right out the door. Starting with any class is made relatively simple thanks to the game’s prelude, which trains you how to use the interface, how to fight, and how to recuperate. 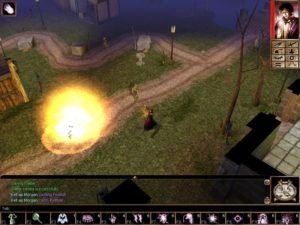 Decking out your character with the latest in adventuring fashions is a predictable trek through fantasy hardware: find a +1 sword; sell excess clutter; trade up for a +2 sword; get a magic shield; and so on and so forth. Most of these objects are found in the numerous dungeons, crypts, and caves, but can also be bought from willing merchants in each central town, and even manufactured with the right ingredients.

NWN is a D&D game, so the monsters are all D&D, but that’s no bad thing with so many expertly detailed enemies to fight. From goblins to orcs, ogres to frost giants, zombies to dire bears, to huge dragons, you’ll face them all and discover your own cunning ploys against each.

Combat, though technically turn-based, is no “he goes, you goes”: there’s always something to watch. Enemies move from side to side, dodge and parry, slash, and cast spells with fluid determination. Particularly when you’re passing from one chapter to the next, the difficulty cranks up and suddenly a slew of new spell effects cascades down in a rainbow of colors, glyphs, and runes that reminds one of Dungeon Siege.

Saving anywhere is vital, but NWN includes some supremely valuable player aids to prevent you from getting stuck. Die amid a huge battle, and you can “respawn” back in the fray for a cost of gold and experience, with any damage you’ve already doled out still in effect. Better still, drop a vital plot item and you can recover it (for a cost) at the Divining Pool at the Temple. Between limitations established by strength and sheer capacity, inventory management becomes one of the biggest headaches in the game. 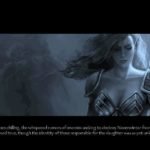 NWN’s cutscenes are simple, but do a good job of forwarding the story. 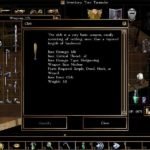 From humble begginings we all start. 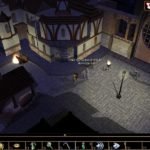 With its cool day-night cycle, the plague-infested city looks a lot more mysterious. 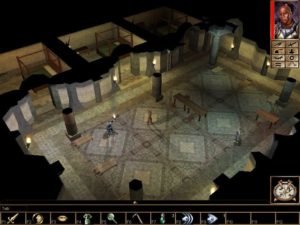 Neverwinter Night’s singleplayer campaign, divided into multiple chapers, is absolutely huge. It’s bustling with main quests, side quests, and various characters that you can mingle with and discover the game’s universe. Characters are all worth interacting between the almost turn-based action, with adult humor that’s a little bawdy without being crass (“I wouldn’t mind having her pork chops on my plate at dinner tonight,” says one guy).

This here’s a massive role-playing game to beat – it will take one or two weeks, or even more, if you’re not in a huge hurry and want to comb through most of it. In any case, it’s complex without being overbearing, and approachable enough that even begginer players of serious RPGs will be able to tackle it without shooing away pen and paper veterans. A true classic.